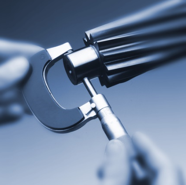 Ever have to do a Gage R&R study?  You decide on the number of operators, the number of parts, and the number of trials.  Then you collect the results on each operator, each part and each trial.  You are now ready for the analysis.   In the past, most people have analyzed the results using the ANOVA method or the Average/Range method.    A third option is now available and that is using the process laid out by Dr. Donald Wheeler in his book EMP III: Evaluating the Measurement Process.

So, this month’s publication continues our look into the Evaluating the Measurement Process (EMP) method.  We will be examining how a Gage R&R analysis can be done using this method.  Dr. Wheeler refers to this as an “Honest Gage R&R Study.”

This methodology uses control charts to ensure that the results from the Gage R&R study are consistent – that there is no bias between operators or inconsistencies in the operator’s repeatability.  A Main Effects chart is used to compare operator averages and a Mean Range chart is used to compare the repeatability of the operators.  The various components of variance are then determined (repeatability, reproducibility, Gage R&R, product, and total).   The % due to each component (e.g., the % of variance due to Gage R&R) can then be calculated.

The fraction of the total variance due to the product variance is called the Intraclass Correlation Coefficient.  The value of the Intraclass Correlation Coefficient allows you to classify the measurement system as a First, Second, Third or Fourth Class monitor.  This classification allows you to interpret the results.   Our previous publication described this interpretation in detail.  If you haven’t read Part 1, it is recommended you do so before reading this part.

You can download a pdf file of this publication here.

And, our SPC for Excel  software has added the ability to analyze a Gage R&R study using Dr. Wheeler's EMP methodology.  For more information, click here. 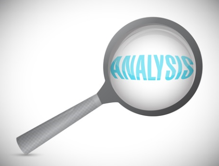 The basic equation describing the relationship between the total variance, the product variance and the measurement system variance is given below:

A measurement system’s class of monitor is determined by the value of the intraclass correlation coefficient (ρ):

This approach ensures that there is sufficient data (degrees of freedom) for the calculation of the variances.  Last month’s publication shows the calculations required to get these values.

Sometimes however you don’t have a control chart on the product or track the measurement system using a standard.  How can you still get this information?  This is where you perform a Gage R&R study.  In the past, most people have analyzed the results using the ANOVA method or the Average/Range method.

A third option is now available and that is using the EMP methodology.  This is described below.

Much more information is available from Dr. Donald Wheeler in his book Evaluating the Measurement Process & Using Imperfect Data (available from www.spcpress.com).

One of your critical to customer measurements is the thickness.  You want to determine how much of your variation is due to the way you measure the thickness.  You select 3 operators and 5 parts for the Gage R&R study. The parts should be representative of the variation in your process.  Perhaps you randomly select one part each day for 5 days.  Each operator tests each part two times.  The results are shown in Table 1.  The operators are designated as A, B and C.

This table is a good method of organizing the data.  It allows you to get a first look at how much variation there is from operator to operator and from part to part.

The data from the Gage R&R study is in Table 1.  Let o = number of operators, p = number of parts, and n = number of trials.  The steps in Dr. Wheeler’s “Honest Gage R&R Study” are explained below.

This step starts with constructing an  X-R Chart on the results using k = o*p subgroups of size n.  This means that each combination of operator-part is a subgroup.  The purpose of this step is to ensure that the results show consistency – statistical control – and that there is not any operator bias in terms of average results (the ANOME chart) or repeatability (the ANOMR chart).  The data can be reorganized as shown in Table 2.

The  X-R charts for the data are shown below.  The range chart is shown in Figure 1. 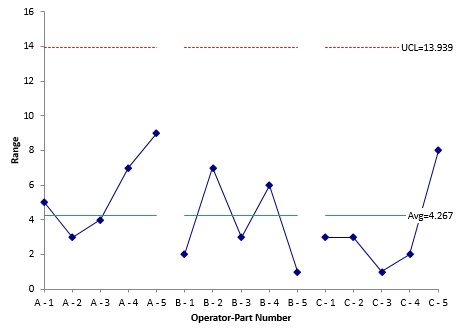 With the range chart, you are looking to ensure that all ranges are consistent.  Each range is a measure of the repeatability for an operator.   If there are no points beyond the upper control limit (UCL), then you can say that the range chart is in statistical control – and conclude that the repeatability of each operator is the same.  If there are any range values above the UCL, you need to find out why – what caused the point to be above the UCL.

The chart in Figure 1 is in statistical control – no points beyond the UCL.  The repeatability variance can then be estimated from the average range shown on the chart:

These limits are added to Figure 2 as shown below.  All three operator average ranges are within the control limits confirming that the operators have the same repeatability. 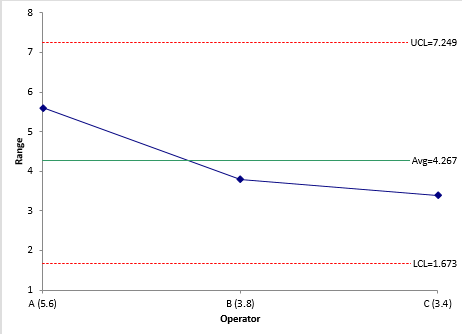 The X chart is shown in Figure 3.  What does this X chart tell you?  You are looking to see if operators appear to have the same results for each part. 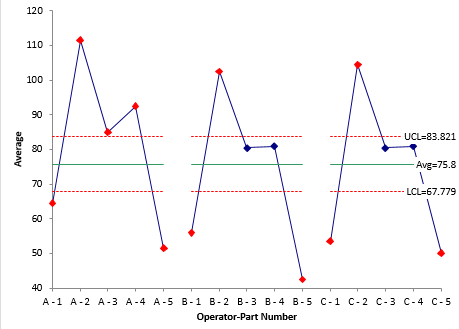 It is the out of control points that you want to focus on.  The points within the control limits are essentially “masked” by the measurement system repeatability.   From Figure 3, it appears that operator A has higher average results than the other two operators.

You can check for differences in the operator averages (called bias) by constructing the main effects chart for the operators (ANOME = analysis of mean effects).  The first step is to calculate the average of the results for each operator:

These three averages are plotted on the main effects chart as shown in Figure 4. 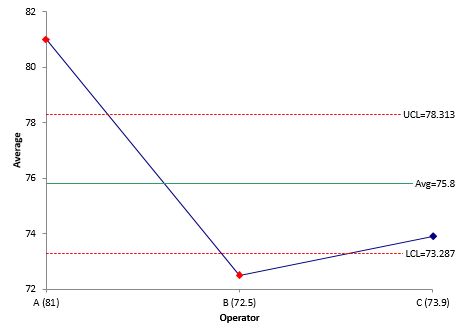 We already did this in step 1 using the average range from Figure 1.   The repeatability variance is given by:

The three operator averages are used to estimate the reproducibility variance.  The equation to calculate this variance is:

The range of the p part averages is used to determine the product variance using the following:

The total variance is the sum of the product variance and the combined Gage R&R variance:

Step 7: Calculate the Fraction of the Total Variance due to Repeatability

This is the ratio of the repeatability variance to the total variance.

Step 8: Calculate the Fraction of the Total Variance due to Reproducibility

This is the ratio of the reproducibility variance to the total variance.

Step 9: Calculate the Fraction of the Total Variance due to the Combined R&R

This is the ratio of the combined R&R variance to the total variance.

Step 10: Calculate the Fraction of the Total Variance due to the Product Variance

This is the ratio of the product variance to the total variance.

Note: this is the value the intraclass correlation coefficient (ρ).

This is the key – all the calculations have been done.  But what do they mean?  Dr. Wheeler uses the table below to interpret the results.

This table was described in detail in our first publication on EMP.  Please refer to that publication for more information.  The first column lists the value of the Intraclass Correlation Coefficient.  The second column lists whether it is a First Class, Second Class, Third Class or Fourth Class monitor – with “First” being the best.

Table 4 below summarizes the variance calculations for this Gage R&R study.

The % values given in this table are similar to what you would get from the ANOVA method for analyzing a Gage R&R.  Most people just focus on the value of % of variance due to the Gage R&R (5.6% here).  If this value is less than 10%, they assume the measurement system is acceptable.  What is acceptable?  The % R&R value by itself does not mean much.  That is why using Table 3 above to interpret the results is so valuable.

This month’s publication looked at Dr. Wheeler’s “Honest Gage R&R Study” procedure.  This methodology involves using control charts to ensure that the results are consistent and predictable and that there is not bias in the operator averages or differences in the operator repeatability.  The various components of variance are then calculated.