Control Limits - Where Do They Come From?

What is A2 and where does it come from? How is it related to the overall average and the average range? What about D4 and D3? This newsletter is designed to answer these questions. The information in this newsletter is adapted from Dr. Don Wheeler's book Advanced Topics in Statistical Process Control (www.spcpress.com).

If you are plotting subgroup averages (e.g., the Xbar control chart), the control limits are given by:

If you are plotting range values, the control limits are given by:

There are three distributions to consider when discussing the control limit equations. These are:

The first five subgroups from the data are shown below.

The subgroup range for the first subgroup is given by:

This was done was all 100 subgroups. We can construct histograms to explore the three distributions referenced above.

The histogram for the distribution of individual values is shown below in Figure 1. 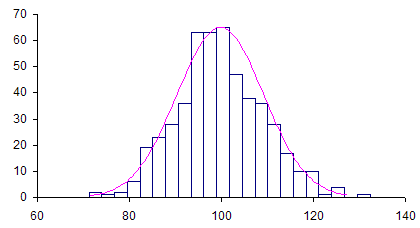 The histogram for the distribution of subgroup averages is shown below in Figure 2. 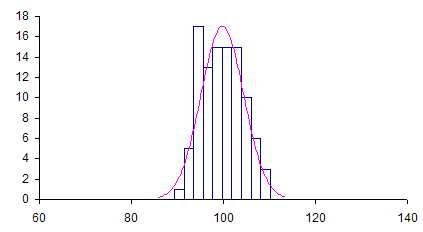 This distribution is also normally distributed as one would expect. The same x-axis scale was used for both Figure 1 and Figure 2. Note that the subgroup averages have less variation that the individual values. The location parameter for this distribution is the overall average defined as the following:

The dispersion parameter is given by the standard deviation of the Xbar values, where k is the number of subgroups.

The values above were obtained using the data for the 1000 subgroups. Again, you can download that workbook here. So, for the subgroup averages:

A couple of items to note at this point:

The distribution of range values is shown in Figure 3. 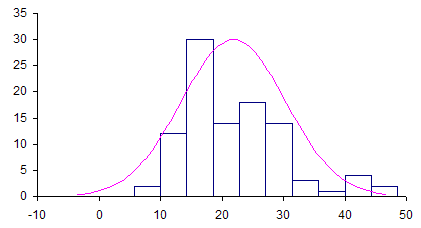 A normal distribution has been superimposed over the ranges. But note that the range values are not normally distributed. They are skewed. This is true of measures of dispersion (variation). For example, if you construct a histogram using the subgroup standard deviations, the distribution will also be skewed. The location parameter for the range distribution is simply the average range:

But what about an estimate of the dispersion parameter for the range values, SD(R)? This is where we have to turn to some theoretical values: d2 and d3.

There is a paper (Tables of Range and Studentized Range, written by H. Leon Harter from 1960 that gives the moments of the range for samples of subgroup n from a normal distribution. For those of you who are interested in the details and the complicated equations, you can download the paper here. The paper also gives some of the history of using subgroup ranges as measures of dispersions. The paper describes the numerical integration required to obtain two values: d2 which is the expected value of the range and d3 which is the standard deviation of that expected value. The two equations are:

Now with the theoretical values of d2 and d3, we can move forward with finding the control limit equations.

Rearranging d3 = SD(R)/SD(X) and using the estimate of Sigma(X) gives:

Now that we have estimated the location and dispersion parameters, we can use them to construct the three sigma limits for the three histograms.

For the individual values, the control limits are:

For the individuals values given in the workbook and using d2 = 2.326 for a subgroup size of 5 the control limits are:

For the subgroup averages, the control limits are:

For the subgroup averages given in the workbook, the control limits are:

The control limits for the Xbar chart are usually written as shown at the start of this newsletter.  The equations contain the control chart constant A2.  You can see from the equations above,  the following is true:

For the range chart, the control limits are:

For the ranges given in the workbook, the control limits are:

The control limits for the R chart are usually given as shown at the start of this newsletter.  Those limits include the control chart constants D4 and D3.  Using the equations above for the range control limits, it can be seen that the following are true: