(Note: all the previous publications in the measurement systems analysis category are listed on the right-hand side.  Select "Return to Categories" to go to the page with all publications sorted by category.  Select this link for information on the SPC for Excel software.)

You have run your Gage R&R study.  You enter the results into your software program.   You run the analysis.  The results come back that the % Gage R&R is 32%.  You look at the acceptance criteria from AIAG:

So, since your % Gage R&R is 32%, your measurement system is unacceptable, correct?  No, that is not the case at all.  In fact, you should NEVER use the acceptance criteria listed above.  It is misleading and not based on the realities of how the measurement system impacts your process.

These three insights give you a very good understanding of the relative usefulness of the measurement system.  The four classes of monitors are the best guidelines available to you for understanding how “good” your measurement system is.  These four classes of monitors are compared to the AIAG acceptance criteria in this publication.

This publication assumes you are familiar with MSA.  If you are not, there are 23 previous publications on our website that explain the techniques in detail.  These publications cover the three methods included below as well as nested MSA for non-destructive methods, the impact of probable error on specifications and control charts, etc.  You can access these publications at this link.

Of course, you need an example to do the comparisons between the four classes of monitors and the AIAG acceptance criteria.  Suppose the thickness of a certain part is important to a major customer.  You want to know how “good” the micrometer you use is, i.e., is the measurement system acceptable? You decide to run a Gage R&R by having 3 operators measure 5 parts 2 times each.  You perform the Gage R&R using operators A, B and C.  The data from the study are given in Table 1 below.

Before analyzing the results, let’s briefly discuss nomenclature.  The AIAG and Dr. Wheeler use different nomenclatures.  The nomenclature is shown in Table 2.

This publication will focus on the value of GRR.  The MSA methodologies give you insights into other things, but the value of GRR is the measure that is focused on by most people.  The desire is to be able to compare GRR to the total variation to determine the % of the total variation that is due to the measurement system, i.e., the combined repeatability and reproducibility.

The Problem is Not in the Calculations

This is interpreted as 28.36% of the total variation is consumed by the repeatability or equipment variation.  The other calculations are shown below for the other standard deviations from the Average and Range method in Table 3.

The %GRR value is then compared to the AIAG guidelines for what makes a measurement system acceptable.  These guidelines are:

There is also a caution statement on that page: “the use of the GRR guidelines as threshold criteria alone is NOT an acceptable practice for determining the acceptability of a measurement system.”

How true.  This is not the way to judge how acceptable a measurement system is – not even close.  And it should never be used.  Let’s explore why.

The Numbers Should Add to 100

That is not the case with the % of total variation numbers given above.  GRR is the combined repeatability (EV) and reproducibility (AV).

Dr. Wheeler does a superb job of showing why these don’t add up to 100.  He shows the trigonometric functions that give rise to the percentage values above.  The percentages listed above are not proportions. But the fact that they are listed as percentages gives the impression that they are.  The major reason is that standard deviations are not additive.

Or in Dr. Wheeler’s nomenclature:

The Acceptance Criteria Issue for the ANOVA Method

Table 5: Acceptance Criteria for the Average and Range Method and the ANOVA Method

Using the standard deviations in Table 2, the ANOVA method has a %GRR:

This is almost to the unacceptable value of 9%..  Using the numbers from the Average and Range method, it is over 10% so it is unacceptable by that methodology.

Again, there does not appear to be any justification that I have found for these guidelines.  Why 10% and 30% or 1% and 9%?  But there is another method which uses rational thinking to determine how acceptable a measurement system is.  And this is Dr. Wheeler’s EMP methodology and the four classes of monitors.

The basic equation describing the relationship between the total variance, the product variance and the measurement system variance is given below.

So, 1 – ρ is the %GRR (compared to the total variance) that we calculated above.  The value of ρ from the Average and Range method is

The Intraclass Correlation Coefficient is used to place the measurement system into one of four classes.  Table 6 summarizes these classes and the characteristics of those classes.

The first column lists the value of the Intraclass Correlation Coefficient.  The second column lists whether it is a First Class, Second Class, Third Class or Fourth Class monitor – with “First” being the best.  In the example above, ρ = 0.8965, so the measurement system is classified as a “First Class” monitor.  But this is the same data that the AIAG guidelines said represented a measurement system that is unacceptable!

Note that the First and Second Class monitors detect Rule 1 very well.  Once you reach a Third Class monitor, you need to apply all four rules to get the chance of detecting the shift high.  Fourth Class monitors are not good at detecting any shifts essentially.

For more details on the four classes of monitors, please see this link.

Comparing the AIAG Guidelines to the Classes of Monitors

You can compare the AIAG guidelines to the classes of monitors by making use of the following:

Table 7 shows the values of ρ versus σe/σx.  Figure 1 is a plot of the data in Table 7.

Table 7: Comparing  to the % GRR Based on Total Variation 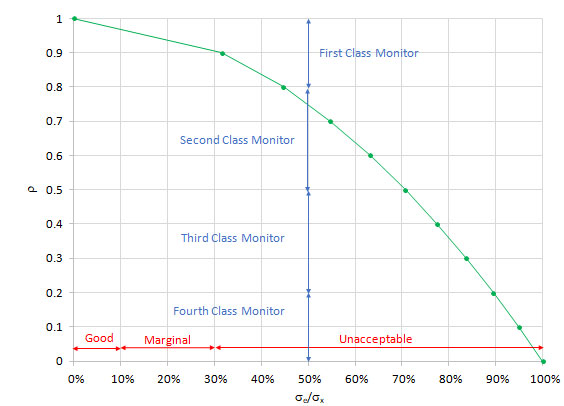 The Classes of Monitors approach has a basis in reality – what really happens in the process.  It focuses rating a measurement system in the following three areas:

Based on these results, the measurement system can be classified as a First, Second, Third or Fourth Class Monitor.

The Average and Range Method, the ANOVA method, and the EMP method will give comparable results for the GRR as a percentage of total variance (not variation).  But the only effective way to interpret the results is to use the Classes of Monitors approach.  Do not use the AIAG acceptance criteria.