This month's newsletter is the first in a multi-part series on using the ANOVA method for an ANOVA Gage R&R study. This method simply uses analysis of variance to analyze the results of a gage R&R study instead of the classical average and range method. The two methods do not generate the same results, but they will (in most cases) be similar.

This newsletter focuses on part of the ANOVA table and how it is developed for the Gage R &R study.  In particular it focuses on the sum of squares and degrees of freedom. Many people do not understand how the calculations work and the information that is contained in the sum of squares and the degrees of freedom.  In the next few issues, we will put together the rest of the ANOVA table and complete the Gage R&R calculations.

If you are not familiar with how to conduct a Gage R&R study, please see our December 2007 newsletter. This newsletter also includes how to analyze the results using the average and range method.

As usual, please feel free to leave comments at the end of the newsletter.

Suppose you are monitoring a process by pulling samples of the product at some regular interval and measuring one critical quality characteristic (X). Obviously, you will not always get the same result when measure for X. Why not? There are many sources of variation in the process. However, these sources can be grouped into three categories:

In this series, we will take a look at how the repeatability and reproducibility are determined using the ANOVA method for Gage R&R.

We will re-use the data from our December 2007 newsletter on the average and range method for Gage R&R. In this example, there were three operators who tested five parts three times. A picture of part of the Gage R&R design is shown below.

The data from the December 2007 newsletter are shown in the table below.

The operator is listed in first column and the part numbers in the second column.  The next three columns contain the results of the three trials for that operator and part number.  For example, the three trial results for Operator A and Part 1 are 3.29, 3.41 and 3.64.

We will now take a look at the ANOVA table, which is used as a starting point for analyzing the results.

The ANOVA Table for Gage R&R

In most cases, you will use computer software to do the calculations. Since this is a relatively simple Gage R&R, we will show how the calculations are done. This helps understand the process better. The software usually displays the results in an ANOVA table. The basic ANOVA table is shown in the table below for the following:

The first column is the source of variability. Remember that a Gage R&R study is a study of variation. There are five sources of variability in this ANOVA approach: the operator, the part, the interaction between the operator and part, the equipment and the total.

The fifth column is the F value. This is the statistic that is calculated to determine if the source of variability is statistically significant. It is the ratio of two variances (or mean squares in this case).

The data above were analyzed using the SPC for Excel software. The resulting ANOVA table is shown below.

Let's see where the numbers come from.

Total Sum of Squares and Degrees of Freedom

The total sum of squares (SST)  is the sum of the other sources of variability.  So,

The total sum of squares is then given by:

where Xijm is the result for the ith operator running the jth part for the mth trial. This equation is simply a fancy way of saying that you subtract the average from an individual result and square that result. This is shown in the figure below for the squared deviation of the first result.

If you do this for each point and add up the results, you will obtain the following:

The calculations are shown in the table below.

There were a total of 45 results.  We calculated the overall average for these results.  So the degrees of freedom associated with the total sum of squares are 45 - 1 = 44.  This can also be calculated as nkr - 1.

Operator Sum of Squares and Degrees of Freedom

In this example, n = 5 and r = 3, so there are 15 results for each operator. The table below shows how the calculations are done: 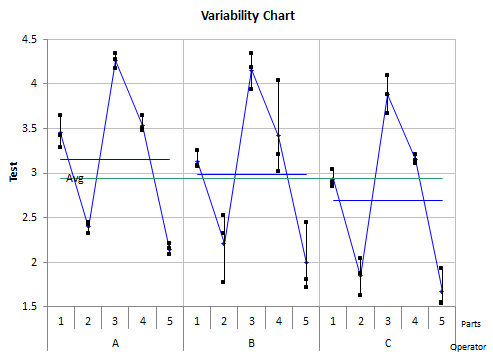 Parts Sum of Squares and Degrees of Freedom

The sum of square due to the parts is done in the same manner as for the operators except the average you are focusing on are the part averages. Algebraically, the equation for SSP is:

where kr is the number of results for a given part (3 operators, 3 trials) and the subscript ".j." is the average of the results for part j across all operators  and trials. The table below shows the calculations.  The original data has been sorted by part.

Equipment (Within) Sum of Square and Degrees of Freedom

The equipment sum of squares uses the deviation of the three trials for a given part and a given operator from the average for that part and operator.  This can be expressed as:

The calculations are shown in the table below.

Again, note that the sum of squares is examining variation around an average.  For the within variation, it is the variation in the three trials around the average of those three trials.

The variability chart below shows the results by part by operator. 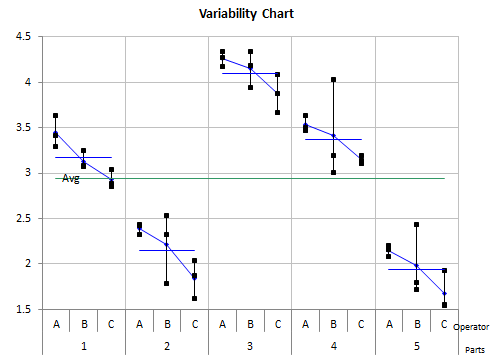 Interaction Sum of Square and Degrees of Freedom

We will make use of the equality stated earlier to find the interaction sum of squares.  This equality was:

The same equality holds for the degrees of freedom:

This is the first of a multi-part series on using ANOVA to analyze a Gage R&R study.  It focused on providing a detailed explanation of how the calculations are done for the sum of squares and degrees of freedom.  We will finish out the ANOVA table as well as complete the Gage R&R calculations in the coming issues.