Interpretation of Alpha and p-Value

Alpha and p-value.  Two commonly used terms in statistical analysis.  We hear these two terms quite often.    Both are used in hypothesis testing where we are trying accept or reject a given hypothesis.  We use them to help us decide if a regression model is “good” or if the predictor variables are “significant.”  We use them to help us conclude if data comes from a specific distribution.  Or we use them to decide if two processes operate at the same average or the same variation.  Or we use them to determine what variables in an experimental design have an impact on the response variable.  The list goes on and on.  But what do these two terms really mean?  This month’s publication looks at alpha and the p-value.  One we choose. The other we calculate.

You may download a pfd version of this publication at this link.   Please fee free to leave a comment at the end of the publication.

Taking Data – There is Always Variation and Uncertainty

If we repeat the process with 20 new observations, will the second sample average be the same as the first one?  Again, maybe yes, but probably not.  Why?  Because there is always variation present, we don’t always get the same result each time.

There is variation and uncertainty in the results we get.  We are trying to use these results to make a decision about our process.  But because of this uncertainty, we have chance of making the wrong decision sometimes.  The two terms, alpha and the p-value, help us deal with this uncertainty.

In this publication, we will be exploring a known population.  This population consists of 5000 data points randomly generated from a normal distribution.  The data used are available for download at this link.

Now, suppose we don’t know the true average, but we want to know if it could be 100.077.  We set up our null hypothesis (H0) and alternative hypothesis (H1) as follows:

The confidence interval depends on three things: the significance level (alpha or α), the sample size (n), and the standard deviation (s).  We select two of these: alpha and the sample size n.

Let’s talk about the significance level for a moment.  The significance level is the probability of rejecting the null hypothesis when the null hypothesis is in fact true.  Put simply, it is the probability that you make the wrong decision.  Using statistics does not keep us from making wrong decisions.  The most typical value of the significance (our alpha) level is 0.05.  We will use 0.05 in this example.  Since alpha is a probability, it must be between 0 and 1.  In this example, we are willing to make a mistake 5% of the time.  Note that you pick the value of alpha.

The equation for the confidence interval around a mean is given below.

The 20 observations were analyzed using SPC for Excel software.  Part of the results are shown in Table 2.  The mean of the 20 observations is 101.3.  This is the value we are going to compare to our hypothesized mean of 100.077. 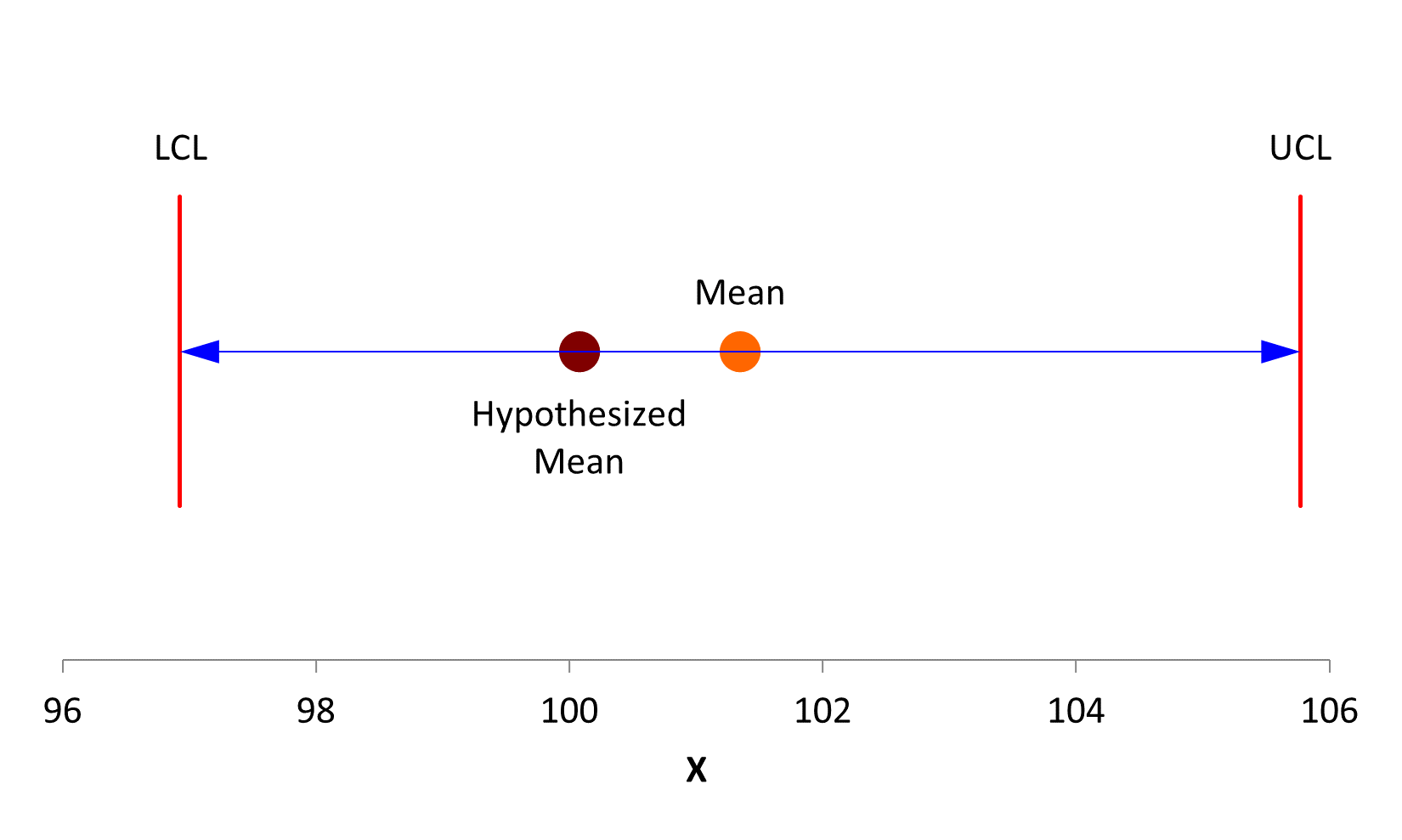 The table includes the value of alpha we picked (0.05) as well as the value of z used in the above equation, which is based on alpha.  We also see a p-value of 0.5734.   Let’s take a closer look at alpha.

We mentioned that alpha was the probability of rejecting the null hypothesis when it was in fact true.  Its value is often 5%.  This means, that if we repeat the above process of taking 20 observations and constructing a confidence interval each time, 5 times out of 100, the confidence interval will not contain the true average of 100.077.  And we would make the wrong decision – reject that the true average is 100.077 when in fact it is true. 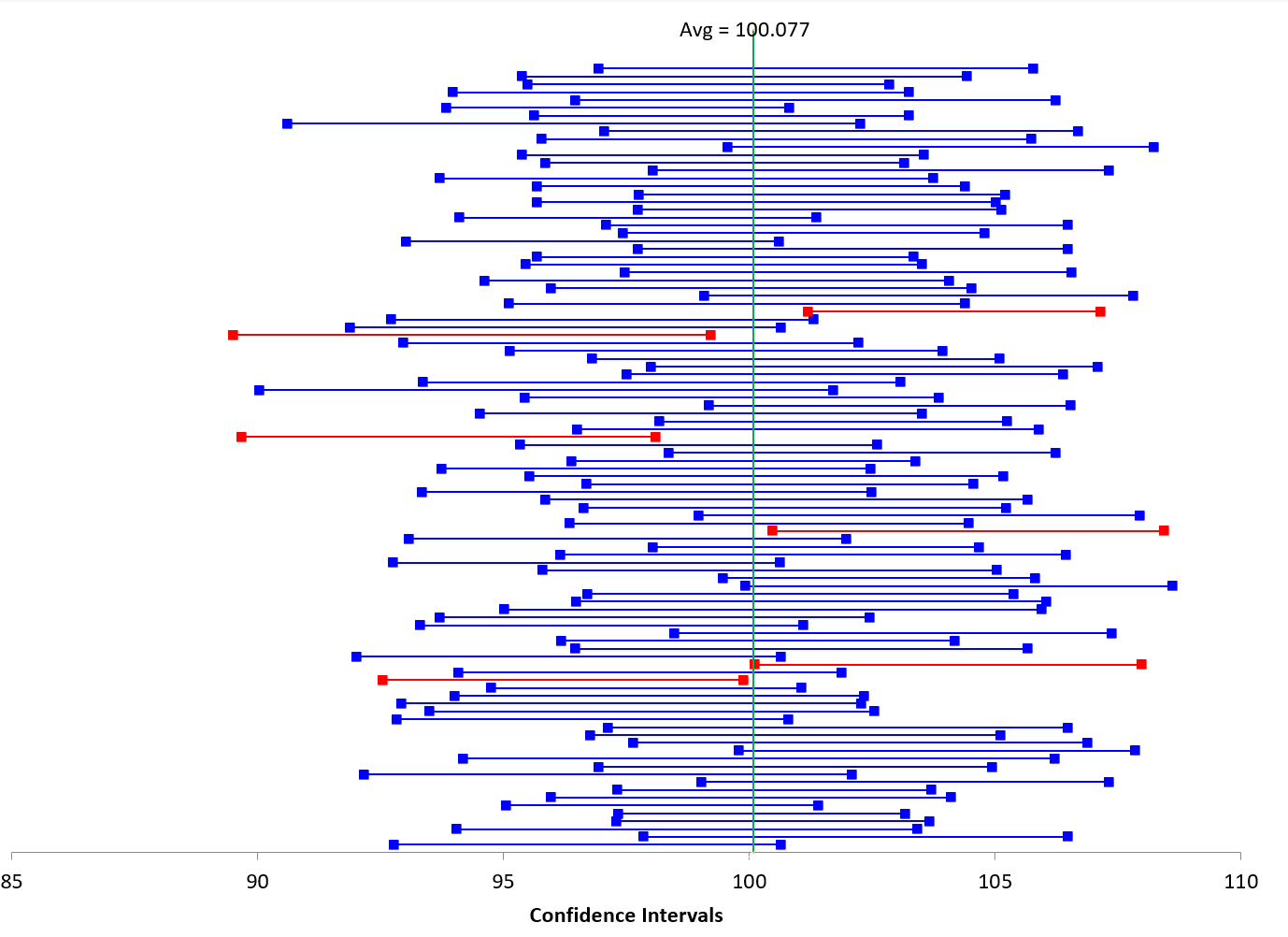 Remember, you pick the value of alpha.  You decide what risk you are willing to accept.  Is 5% an appropriate risk for every situation?  No, not all.  Maybe you’re dealing with something related to safety.  Is 5% adequate in safety?  No, you probably want 1% or something even less. In other situations, you might be willing to live with 10% error.  The key is that you make the decision – you decide on the value of alpha.

While we pick the value of alpha, the p-value is a calculated value.  It is calculated different ways depending on the statistical technique but the interpretation is the same.  The p-value can be interpreted as the probability of getting a result that is as extreme or more extreme when the null hypothesis is true.  The p-value in the results in Table 2 is 0.5734.   The sample mean is 101.3.  The absolute deviation from the average is |101.3 - 100.077| = 1.223.  This means that there is a 57.34% probability of getting a sample mean result that is greater than +/- 1.223 from the average.  Since this probability is large, we conclude that the null hypothesis is true.

What if the p-value was small, like 0.03?  In this case, there is only a 3% chance of obtaining this sample result or something more extreme.  We would reject the null hypothesis.

How does the p-value vary with random samples over time?  It turns out it varies much more than you would think.  The p-values were calculated for each those 100 random samples with 20 observations shown in Figure 2.  The maximum p-value was 0.982.  The minimum p-value was 0.004.  That is a large range when taking 20 random observations from the same population. The distribution of the p-values is shown in Figure 3. 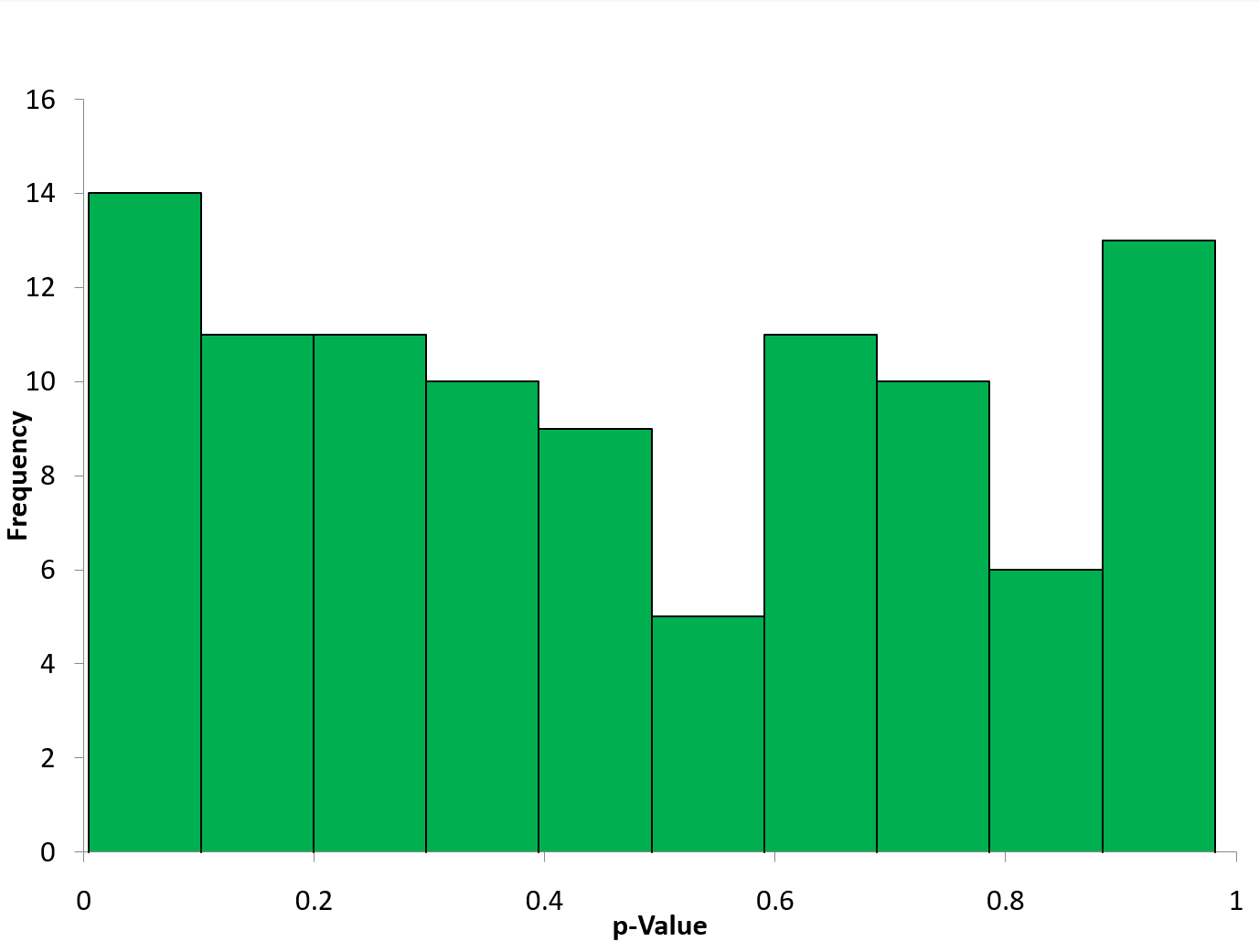 The chart almost looks like a uniform distribution.  In this case, it is.  With continuous data and assuming the null hypothesis is true, the p-values are distributed uniformly between 0 and 1.

Using Alpha and the p-value Together

So, how do we use these two terms together.  Basically, you decide on a value for alpha.  What probability of being wrong do you want to use?  What makes you comfortable?   Suppose that is alpha = 0.10.  You then collect the data and calculate the p-value.  If the p-value is greater than alpha, you assume that the null hypothesis is true.  If the p-value is less than alpha, you assume that null hypothesis is false.  What do you do if the two values are very close?  For example, maybe the p-value is 0.06 and alpha is 0.05.  It is your call to make in those cases.  You can always choose to collect more data.