You are monitoring your process using an individuals control chart. The process just contains noise – it is in statistical control, only the random common causes of variation are present. Suddenly, unbeknownst to you, the process shifts significantly. You continue to take data, assuming all is well in the process. How long will the individuals control chart take to signal that a significant process shift has occurred? This signal would be a point beyond the control limits.

It depends primarily on the size of the shift you would like to detect. The larger the shift, the less samples on average it takes to detect the shift. The ability of a control chart to detect a shift is often characterized by the Average Run Length (ARL). This publication explores the ARL and what it means.

Please feel free to leave a comment at the end of this publication.  You can download a pdf copy at this link.

Suppose you are collecting data hourly on your process. The data for the last 20 hours is shown in Table 1.

These data were used to construct the individuals control charts in Figures 1 and 2. Figure 1 is the X chart. Figure 2 is the moving range chart. 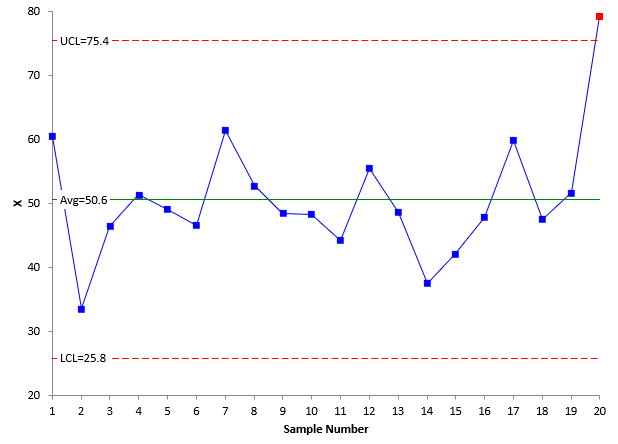 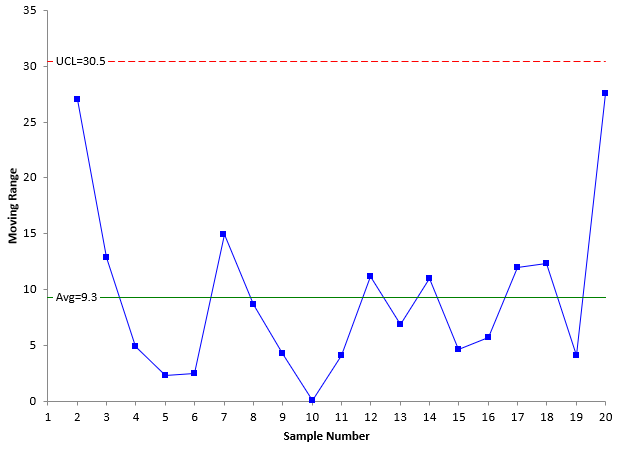 The last point on the X control chart is out of control – it is a point beyond the control limit. A special cause of variation is present. When an out of control point occurs, you are supposed to look for the root cause of it and eliminate that root cause, so it does not come back again in the process.

The reasons for out of control points are not always easy to find. Sometimes, a special cause is fleeting. It occurs for that point only and is gone by the time you look for the root cause. These are very hard to find. Sometimes it does represent a shift in the process. Something has changed in the process and may not change back until you find the root cause. Either way, the out of control point tells you something has changed significantly in the process.

The last point is out of control. Is this where the process change occurred? Maybe or maybe not. This is where the ARL comes in – it tells you the average run length before a process shift is detected. To do this, a mathematical model has to be selected. 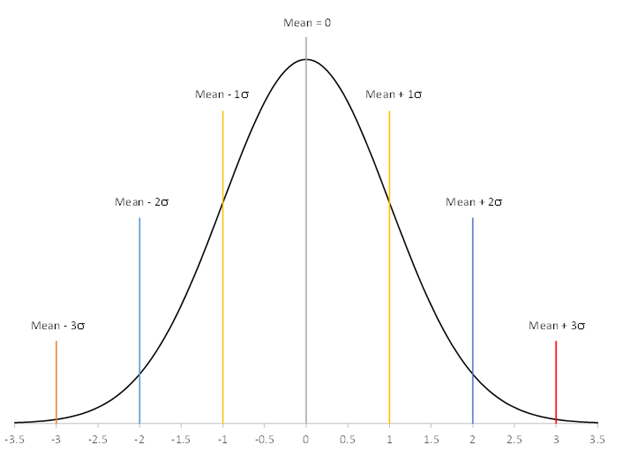 The normal distribution has the following characteristics: 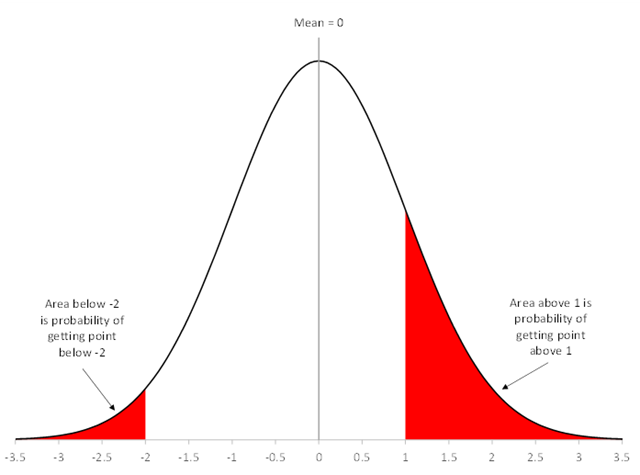 The red area on the left represents the area under the curve above 1σ. This is also the probability of getting a point above 1σ. Let "a" represent the area above 1c. You can calculate that area using Excel's NORM.S.DIST function. The area above 1σ is given by:

There is a 15.87% probability of a point being beyond 1σ. You use the fact that the area under the curve is 1 when you are finding the area above a certain point using this Excel function.

The red area on the right represents the area under the curve below -2σ. The equation to find this area is:

There is a 2.28% probability of a point being below -2σ. You can find the area under the curve between -2σ and 1σ by adding the two areas above together and subtracting from 1.

The value of "a" plays an important role in determining the ARL.

Suppose your process is in control. Suddenly, the process shifts by 1 sigma. The situation is depicted in Figure 5. 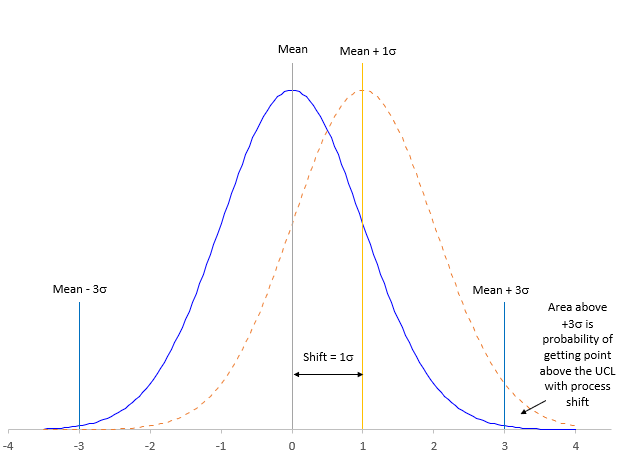 The blue solid line is the original process (before the process shift occurred). The numbers on the x-axis represent sigma, e.g., - 1 means -1σ. The plot shows the mean +/- 3σ lines, which represent the location of the LCL and UCL.

The orange dotted line represents the process shift of 1 sigma. The new mean of the process is the mean + 1. The entire distribution has shifted to the right. The probability of getting a point beyond the existing UCL is the area under the curve greater than 2 for the shifted process.

Let k = the number of points after the process shift. The probability (p) that a point will fall beyond the UCL with k points is given by:

We can use the probability of detecting the process shift with the first point (a), the size of the shift and the number of observations (k) to build the "power function" curves for the individuals control chart. This chart is shown in Figure 6.

Figure 6: Power Function Curves for the X Control Chart for Points Beyond the Control Limits 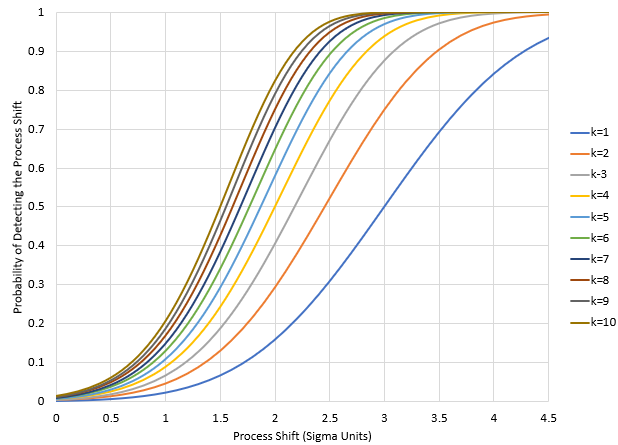 The example above was a 1 sigma shift. You can see the first two points have a probability of about 0.045 from the graph. With 10 points, the probability of detecting the shift is only about 0.20 or 20%. You can confirm this with the equation from above:

That is a lot of points before picking up the 1 sigma shift. This is why it is recommended you use other tests besides points beyond the control limits (e.g., zones tests) if you need to pick up smaller process shifts.
Suppose the process shift is 3 sigma to the right. In this case, the new process mean would be the same as the +3σ, the UCL for the pre-shift process. In this case, a = 0.5. This means that there is a 50% probability of detecting the process shift with the first point after the process shift; a 75% chance within the first two points and about 88% chance within the first three points. The larger the shift, the easier it is to detect using the points beyond the control limit test.

You can use these results to calculate the ARL.

The average run length is calculated by multiplying each value of k by the probability of detecting the shift on the kth observation and then summing those products up. It is also given by the following:

Figure 7 is a plot of the ARL versus various shift sizes for the X chart.

Figure 7: ARL versus Size Shift for the X Control Chart 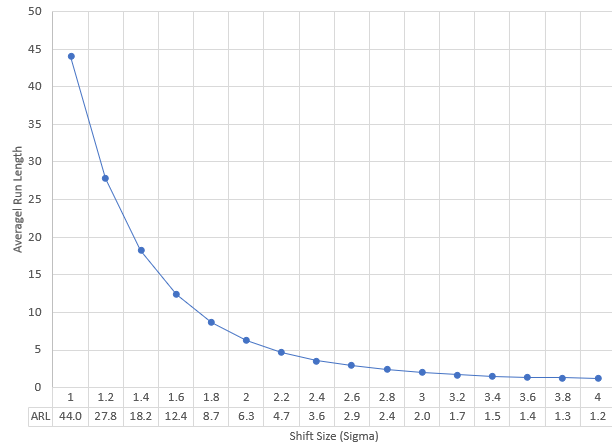 You can see that ARL decreases as the size of the process shift increases. Of course, this is not surprising. But it does show the need to use the additional out of control tests to detect small process shifts more quickly.