Sometimes people ask why some software packages give different values for the control limits. Which program is correct?  The answer is probably both.  The difference is simply how the standard deviation is estimated.  The objective of this newsletter is to show three different, but common, ways that the standard deviation may be estimated.  We will look at data that are formed into subgroups and the control limits on the X chart.

As always, you can leave comments at the end of the newsletter.

The data we will use are shown in the table.  We have 10 subgroups, each containing 3 observations or results.

We will look at three different ways to estimate the standard deviation.  These impact how control limits are calculated.  Control limits for the X chart are given by:

The value of σ depends on the method you use to estimate it.  We will look at three methods for estimating σ for subgroup data:

where Ri is the range of the ith subgroup and k is the number of subgroups.  The standard deviation is then estimated from the following equation:

For the data in Table 1, the average range and σ are given by:

Using the estimate of the standard deviation from the average range, we can now calculate the control limits:

You may not be used to calculating control limits this way for the X chart.  You probably use the following equations:

where A2 is a constant that depends on subgroup size.   Consider just the UCL.  There are two different equations for the UCL above, which must give the same result.  So,

This can be rearranged to the following:

Substituting for R and solving for A2 gives:

Substituting in d2 and n for our example gives:

This is the value of A2 for a subgroup size of 3 that you find in the tabulated control chart constants for A2.  For a table of these values, please see our newsletter our X-R control charts.  So, both methods for calculating the control limits are equivalent.  The X control chart for these data is shown in Figure 1.

Figure 1: X Based on Sigma from Average Range 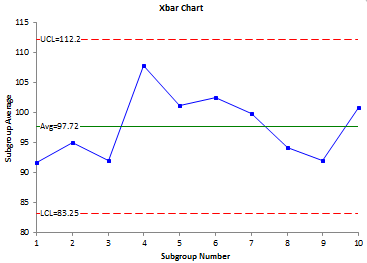 This third method of estimating the standard deviation gives another value for σ.  The control limits will  be different as well:

The control chart will look the same as Figure 1 - again with slightly different control limits.

This leads to different values for the control limits.  Which method is correct?  All three are correct.  Dr. Donald Wheeler has suggested that the average range method is more robust than the pooled standard deviation.  But in the end, the important thing is the story that the control chart is telling you about your process.  Minor changes in the estimate of the standard deviation will not change this in most cases.