When to Calculate, Lock, and Recalculate Control Limits

The answers provided below represent what I have found works over the years. Your comments are welcomed at the end of the newsletter for what has worked for you. Our March 2011 newsletter reviewed the basic purposes of a control chart and contains good background information for this newsletter. When this newsletter talks about calculating control limits, it includes the calculation of the average, upper control limit (UCL), and lower control limit (LCL).  Of course, we have our Quick Links below.

How many points do I need before I can calculate control limits when I am starting a new control chart?

Back in those days, the calculations were manual - or at best with a calculator. A basic reason for waiting to do additional calculations I think. Now with computer software, the calculations are automatic and not even seen by the user. Now people talk about how many degrees of freedom the estimate of the standard deviation should have. 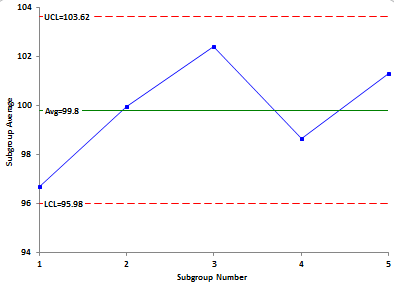 Figure 2: Recalculate Limits After Each Point Until You Have 20 Points 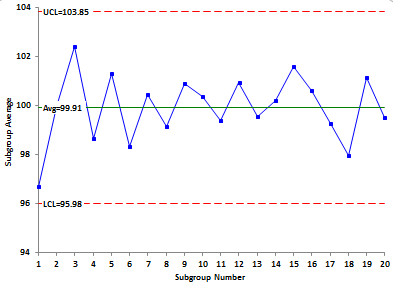 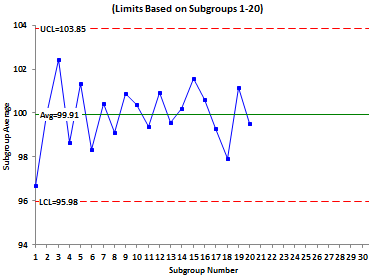 Some data are not collected very frequently. For example, company-wide key performance indicators (see last month's newsletter) are usually collected monthly. It will take a while to get to 20 individual results (months in this case). Many organizations want to look at year-to-year changes - even if the changes they see are just due to common causes of variation (a much too common example of leadership not understanding the information contained in variation). In these cases, you can take one year's worth of data (12 data points) and lock the limits based on these data. These 12 data points represent your baseline data.

How many points have to be "in-control" before I have "good" control limits?

Remember, being "in-control" is not the natural state. It takes work to bring a process into statistical control and keep it there. Using the right method to calculate control limits minimizes the impact of out of control points. In addition, the more data you have, the less impact out of control points will have on the calculations.

Should I delete the out-of-control points before calculating the control limits?

This is similar to the last question. The rule of thumb is that if you know the reason for the out of control point, then delete it from the calculations. Out of control points do have an impact on the numerical values of the control limits. How much depends on how far the point is out of control and the amount of data you have.

When should I recalculate the control limits?

Ideally, control limits should only be recalculated when you have made a process improvement - that is, you made a fundamental change to the process and it improved the process by either moving the average or reducing the variation. You know if a process change has worked because the control chart you are using will show an out of control situation after the process change. 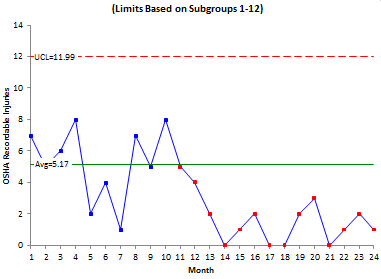 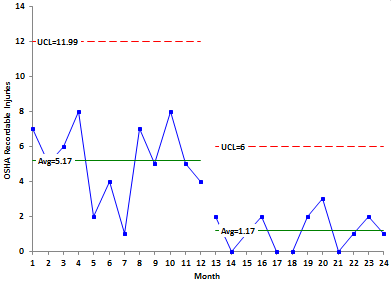 Sometimes, a control chart goes out of control and you begin to look for the special cause of variation. Suppose you have a point beyond the upper control limits as shown below. You look and look but can't find a reason for the out of control point. The next data point comes back into control. Don't worry about it. You missed the opportunity to find the reason for that out of control point, but it will probably be back. But this does not mean you do anything to the control limits.   The one point above the upper control limit was caused by a fleeting special cause - it was there and then it was gone.

Figure 6: Control Chart with Fleeting Special Cause of Variation 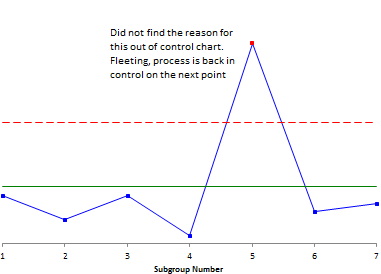 The real problem is when you can't find the reason and the special cause stays with you - maybe you have a run above the average as shown below.  The run above the average is caused by a special cause that remains - maybe something like a subtle change in a raw material. But it is still around; you just haven't found the reason yet. You can't find out what happened. What do you do now?

Figure 7: Control Chart with the Special Cause that Stays Around 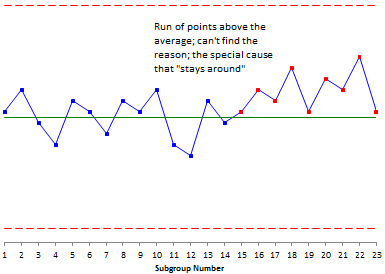 You have a couple of options here. If the increase in average is not what you want, you may have to adjust your process to bring the average back down. That is not the "proper" thing to do but it brings the process back to where it was. If the increase in average is what you want, then recalculate the control limits from when the shift occurred and use this as the new process.  In both these cases, the special cause is still around.  If it goes away, the process may well reverse to where it was.