This month's newsletter is the second in a multi-part series on using the ANOVA method for a Gage R&R study.  This method simply uses analysis of variance to analyze the results of a gage R&R study instead of the classical average and range method. The two methods do not generate the same results, but they will (in most cases) be similar.   With the ANOVA method, we will break down the variance into four components: parts, operators, interaction between parts and operators and the repeatability error due to the measurement system (or gage) itself.

The first part of this series focused on part of the ANOVA table.  We took an in-depth look at how the sum of squares and degrees of freedom were determined.  Many people do not understand how the calculations work and the information that is contained in the sum of squares and the degrees of freedom.  In this issue we will complete the ANOVA table and show how to determine the % of total variance that is due to the measurement system (the % GRR).

As always, please feel free to leave a comment at the bottom newsletter.

We are using  the data from our December 2007 newsletter on the average and range method for Gage R&R.  This newsletter also explains how to set up a gage R&R study.  In this example, there were three operators who tested five parts three times.  A partial picture of the Gage R&R design is shown below.

The ANOVA Table for Gage R&R

In most cases, you will use computer software to do the calculations. Since this is a relatively simple Gage R&R, we will show how the calculations are done. This helps understand the process better. The software usually displays the results in an ANOVA table. The basic ANOVA table is shown in the table below for the following where k = number of operators,  r = number of replications, and n= number of parts.

The first column is the source of variability. Remember that a Gage R&R study is a study of variation. There are five sources of variability in this ANOVA approach: the operator, the part, the interaction between the operator and part, the equipment and the total.

The second column is the degrees of freedom associated with the source of variation. The third column is the sum of squares.  The calculations with these two columns were covered in the first part of this series.

The fifth column is the F value. This is the statistic that is calculated to determine if the source of variability is statistically significant. It is based on  the ratio of two variances (or mean squares in this case).

The data was analyzed using the SPC for Excel software.  The results for the ANOVA table are shown below.

Note that there is an additional column in this output – the p values.  This is the column we want to examine first.  If the p value is less than 0.05, it means that the source of variation has a significant impact on the results. As you can see in the table, the “operator by part” source is not significant.  Its p value is 0.9964.  Many software packages contain an option to remove the interaction if the p value is above a certain value – most often 0.25.  In that case, the interaction is rolled into the equipment variation.  We will keep it in the calculations here – though it has little impact since its mean square is so small.

The next column we want to look at is the mean square column.  This column is an estimate of the variance due to the source of variation.  So,

Now consider the interaction expected mean square which is given by:

Note that the EMS for parts contains the variances for repeatability, the interaction and parts.  This is what is estimated by the mean square for parts.   And last, the expected mean square for the operators is given by:

The EMS for operators contains the variances for repeatability, the interaction and operators.  This is what the mean square for operators is estimating.

The Variances of the Components

We can solve the above equations for each individual  σ2.  Repeatability is already related directly to the mean square for equipment so we don’t need to do anything there.  The other three can be solved as follows: 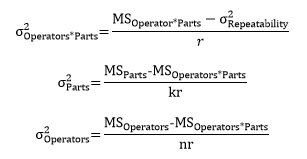 We can now do the calculations to estimate each of the variances.

Note that the value of the variance for the interaction between the operators and parts is actually negative.  If this happens, the variance is simply set to zero.

The Measurement Systems Analysis manual published by AIAG (www.aiag.org) provides the following definition: The measurement system variation for repeatability and reproducibility (or GRR) is defined as the following:

where EV is the equipment variance and AV is the appraiser (or operator) variance.  Thus:

The total variance is the sum of the components:

The results for all the sources of variation are shown in the table below.

Based on this analysis, the measurement system is responsibility for 12.14% of the total variance. This may or may not be acceptable depending on the process and what your customer needs and wants. Note that this result is based on the total variance.  It is very important that the parts you use in the Gage R&R study represent the range of values you will get from production.

One of the major problems people have with Gage R&R studies is selecting samples that do not truly reflect the range of production.  If you have to do that, you can begin to look at how the results compare to specifications.  We will take a look at that next month as we compare the ANOVA method to the Average and Range method for analyzing a Gage R&R experiment.  You could also use a variance calculated directly from a month's worth of production in place of the total variance in the analysis.

In this newsletter, we continued our exploration of the using ANOVA to analyze a Gage R&R experiment.  We completed the ANOVA table, presented the expected mean squares and how to use those to estimate the variances of the components, and showed how to determine the %GRR as a percent of the total variance.

In the next newsletter, we will compare the ANOVA method to the Average and Range method for Gage R&R.