We will start with a quick review of how a destructive Gage R&R experiment is set up.  Since the part or sample is altered or destroyed during testing, it cannot be retested.  For example, in heat treating of steel tubes, a tensile test is often done to measure tensile strength.  The sample is destroyed during testing so you cannot have the same or different operators test that sample again.

Without the ability to retest, how can you estimate the Gage R&R? There are two critical items here.  First,  you have to be able to assume that a batch of material is so close to the same that you can reasonably assume that the parts in the batch are the “same” part.  This means that the batch is homogeneous.  In the perfect world, if you took any sample from that batch, the test result would be the same.  Second is the design setup.  If all the operators can measure parts from each batch, then you can use the traditional method of running a Gage R&R - the crossed design.  However, if each operator cannot measure parts from each batch (e.g., not enough parts from each batch to do this), then a nested Gage R&R must be used.

You are involved in heat treating of parts and want to perform a Gage R&R analysis on the hardness tester.  To measure hardness, a piece of the product is cut, prepared and tested.  That piece is altered, so it cannot be retested.  The parts are produced in small batches.  You are confident that the parts within a batch are homogeneous.    You want to include three operators in the Gage R&R study.  You would like each operator to test two parts per batch.  But there are not always enough parts for each operator to test parts from each batch.  You will have to use a nested design.  You decide to use 15 batches and take 2 parts from each batch.  Operator 1 will measure the two parts for batches 1 to 5; operator 2 will measure 2 parts from batches 6 -10;  and operator 3 will measure 2 parts from batches 11 - 15.  The resulting from the Gage R&R study are shown in Table 1.

We will use analysis of variance (ANOVA) to analyze the results of our destructive Gage R&R study.  This analysis method was described in detail on our three part series on ANOVA Gage R&R.  You can review these newsletters for more information on the calculations.  We will show the results here.

The data were analyzed using the SPC for Excel software package.  Remember there are three things you can compare the Gage R&R results to:

The ANOVA table for these data is shown in Table 2.

The first column is the source of variability. Remember that a Gage R&R study is a study of variation. There are four sources of variability in this ANOVA approach: the operator, the batch, the repeatability, and the total.  Note that the batches are nested within operators.  This is sometimes denoted as “Batch (Operator).”

The fifth column is the F value. This is the statistic that is calculated to determine if the source of variability is statistically significant. It is the ratio of two variances (or mean squares in this case).  The sixth column contains the p value.  The p column is the column we want to examine first.  If the p value is less than 0.05, it means that the source of variation has a significant impact on the results.  In this example, the “batch” has significant impact on the results, while “operator” does not.  This is what you want – it means that the measurement system can distinguish between the parts used in the study.  Gage R&R studies attempt to quantify this by determine the % Gage R&R value.

The best way to examine results is by looking at each source’s contribution to the total variance.  This approach uses the variation of the parts uses in the study.  Table 3 shows the results for this example.

The last column in Table 3 is the % contribution to the total variation.  This column is determined by dividing the source’s variance by the total variance. For example:

A rule of thumb often used to determine if a measurement system is acceptable is as follows:

Note that the variance component column is additive, i.e., the total variation is sum of the individual sources of variation.

So, based on these results, the hardness tester is responsible for about 5% of the total variance.  This test method appears to be very good.

The “% Contribution” column is determined by dividing the 6*SD spread for the source of variation by the value of 6*SD for the total variation.  Thus for total Gage R&R:

This means that the “spread” of the Gage R&R takes up 22.4% of the total spread. Note that the % total Gage R&R % contribution is 22.4% - compared to 5.02% when looking at the variances.  This result implies that the test method may need some work.

You can also compare the standard deviation to the specification range.  The % tolerance column does this and is the 6*SD spread for the source of variation divided by the tolerance range (38 – 30) = 8.  For example,

This means that the Gage R&R spread takes up 21.3 % of the tolerance spread.

This means that the Gage R&R spread takes up about 11% of the total process spread. 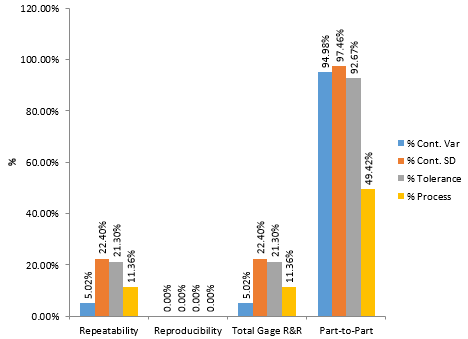 This is one reason that Gage R&R is not crystal clear at times.  The results depend on how you analyze the results.  But in the end, whether or not a measurement system is acceptable depends on you and your customer.

This month’s addition to our SPC knowledge base has looked at how you analyze a destructive (nested) Gage R&R experiment.  In this type of experiment, the part is destroyed or altered and cannot be re-measured.