Gage R&R analysis is a common technique for analyzing “how good” your measurement system is.   The R&R stands for repeatability and reproducibility.   You want a measurement system that can tell the difference between parts or samples from your process – or, at a minimum, tell you if a part is within specifications.  A Gage R&R analysis helps you answer these questions.

There are few things to consider when determining how to setup a Gage R&R analysis.  First, is your test non-destructive or destructive? With a non-destructive test, the part is not altered during the testing.  Different operators can measure the same part over and over.  With a destructive test, the part is altered or destroyed during the test.  Different operators cannot measure the same part.  The next decision is the type of Gage R&R design to use: crossed or nested.

This month’s publication helps you determine what type of Gage R&R design to use.

Reproducibility is the "between operators" variation. It is the variation due to different operators when measuring the same characteristic on the same part using the same measurement system.  It is sometimes call the operator variation.

Figure 1 lays out how to select the appropriate Gage R&R design. 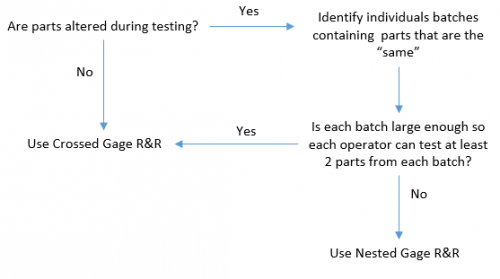 The first question deals with if the measurement system is non-destructive or destructive.  If it is non-destructive, then the parts are not altered during testing.  In this case, you use a crossed Gage R&R design.  In this type of design, you select a number of parts from the process (e.g., ten parts) and each operator tests each part multiple times.

If the part is altered during testing, then the measurement system is destructive.  You cannot just select parts from the process and have each operator test each part.  The part is altered or destroyed, so each part can only be tested one time by one operator.   At this point, you have to begin to think about “batches.”

To conduct a gage R&R for a destructive measurement system, you have to make a critical assumption.  You have to assume that you are able to identify a batch of parts where the parts are so close to being alike that you can reasonably assume that the parts in the batch are the “same.” You are making the assumption that the batch is homogeneous.  If you measure any part of the batch for the same characteristic, you will get the same result in the perfect world.

The next question for the destructive measurement system involves the number of parts in each batch.  Are there enough parts in each batch so that each operator in the study can run at least two parts from each batch?  For example, suppose you are measuring the hardness of a steel bar and would like to do a Gage R&R on the hardness tester.  You consider each bar to be a batch.  You can cut the bar into 10 pieces to be tested for hardness.  Each of these pieces is considered to be the same.  Suppose you have three operators and you want each operator to test two pieces per batch.  You need 6 pieces per bar to do this.  So, you have enough pieces for each operator to test pieces from each batch.  In this case, you use a crossed Gage R&R design.

These designs are described in more detail below.

For example, you may decide to use 2 operators, 3 parts and 2 trials.  This means that operator 1 will measure each of the 3 parts 2 times.  Operator 2 will measure the same 3 parts 2 times.  In this example, there will be a total of twelve measurement results.  This type of experiment is called a “crossed” gage R&R because each operator tests each part.  The experimental layout is shown below in Figure 2.

Figure 2 shows the 2 trials for part 1 that Operator 1 runs.  Suppose Operator 1 gets the following tests results for the two trials: 0.29 and 0.41.  The results are not the same.  Not surprising.  Everything varies.  The first question to ask is

What are the sources of variation in these two numbers?

The part is the same.  The operator is the same.  The variation is simply a measure of how well one operator can repeat the test on same part.  So, the source of variation in these number is how repeatable the test method is – the repeatability.  It is a measure how close the operator is to getting the same result each time he measures the same part.  Each set of trials for each part, under each operator, gives another estimate of the repeatability.

There are two methods commonly used to analyze the results of a crossed gage R&R:

All these analysis methods have been covered in previous newsletters on measurement systems analysis.

Each part is altered or destroyed with a destructive measurement system.  So, each operator cannot measure the same part multiple times.  As discussed above, this is where you have to make a critical assumption.  You have to assume that you are able to identify a batch of material that is so close to the same that you can reasonably assume that the parts in the batch are the “same.” You are making the assumption that the batch is homogeneous.

For example, suppose you make powdered product like polyvinyl chloride (PVC).  You take a one-pound “batch” of PVC from the final product silo.  You want to test the material for inherent viscosity.  The sample you test is destroyed during the testing.  You can mix the sample very well and assume that the batch is homogeneous.  Thus, the samples from this one-pound batch are the “same.”

The next question you must consider is the design setup.  If all the operators can measure parts from each batch, then you can use the crossed Gage R&R described above.  Figure 3 shows this design setup.

What causes variation in the results between part 1 and part 2 in the design shown in Figure 3?  It is the same test and the same operator – similar to the crossed Gage R&R explained above where the difference is due to the measurement system repeatability.    But unlike the crossed design, the same part is not being tested.  We are assuming that the parts are the same since they come from a homogeneous batch.   In reality, the difference is due to the measurement system repeatability and the within-batch variation.   The assumption is that the batch is homogeneous and that the within-batch variation should be small.  If a large amount of variation comes from part 1 and part 2 results, then you should question whether you really have a homogeneous batch.

But, if there are not sufficient parts in each for each operator to test multiple times, then you must use a nested Gage R&R design.  Figure 4 shows how a nested R&R design for destructive measurement systems is laid out.

When operator 1 runs the two parts in batch 1, what the sources of variation present?  Again, it is the same operator.  And we are assuming that parts 1 and 2 are essentially the same.  So, this is estimating the repeatability of the test method.  But it also contains the within-batch variability.  This is true for destructive tests whether you use the crossed or nested Gage R&R design.

ANOVA is used to analyze the results of a nested gage R&R for destructive measurement systems.  The average and range method cannot be used.  We will look at how this done next month.

This newsletter has shown the differences in setting up a gage R&R study for non-destructive testing and a gage R&R for destructive testing.  For non-destructive measurement systems, you will always use the crossed Gage R&R design because each operator can test each part multiple times.  With the destructive measurement systems, you have to be able to define batches that are homogeneous – batches where the parts are considered to be the “same.”  You will use the crossed Gage R&R analysis if each operator can test multiple parts from each batch.  However, if there are not enough parts in each batch to accomplish this, you will use the nested Gage R&R design.