How Much Data Do I Need to Calculate Control Limits?

(Note: all the previous publications in the control charts (basics) category are listed on the right-hand side.  Select "Return to Categories" to go to the page with all publications sorted by category.  Select this link for information on the SPC for Excel software.)

So, when do you have enough data?  Two samples are obviously not enough.  Thousands of samples are probably a few too many.  How do you decide when there are enough data?  The month’s publication takes a look at how you can determine this.  And, of course, our old friend variation is a part of the process.  There is always variation present - and you have to account for that uncertainty in determining how much data are enough.

Please feel free to leave a comment at the end of the publication.  You may download a pdf copy of this publication at this link.

We will use a dataset with 200 samples to help us decide when there are enough data to set the control limits.  200 samples are definitely more than enough data, i.e., assuming the process is in statistical control.  We will start with the individuals control chart and show the impact the number of samples has on the control limits.  We will take a look at the entire 200 samples and then backtrack to take a look at smaller sample sizes.

To complete the process, we need two things.  One is a method of determining the degrees of freedom.  There are simple equations to help us with this.  Second, we have to determine how much uncertainty we want to live with.   This will be up to you, but typically it is 15 to 20%.

The first step in our analysis is to determine if the process (our dataset) is in statistical control.  You can download the data set here if you would like.  Figure 1 is the individuals control chart for our data. 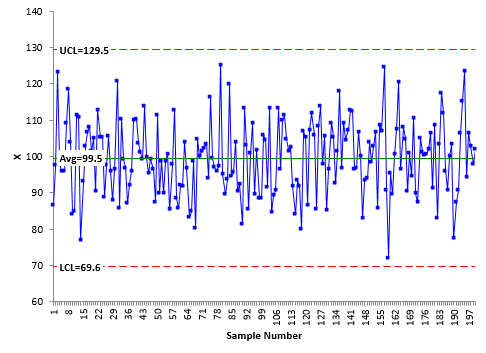 Each individual sample result is plotted.  The average and control limits are calculated and added to the control chart.  The process depicted in Figure 1 is in statistical control.  There are no points beyond the limits and no patterns.  It has an average of 99.5 with an upper control limit (UCL) = 129.5 and lower control limit (LCL) = 69.6. 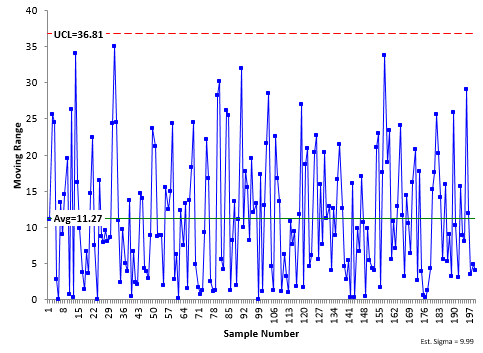 The averages and control limits were calculated using the 200 samples.  That is a lot of samples, so we are pretty confident in these values, particularly since the process is consistent and predictable – in statistical control.  If we took another 200 samples from our process, we would not get exactly the same results – but they would be close.  What if we only took 10 samples?  Would the results be as close?  Maybe, but probably not.

where d2 is a control chart constant.  For a moving range chart using the range between consecutive samples, d2 is 1.128.  Our estimate of sigma, the variation in the individual values, is 9.99.   The average moving range is also used to calculate the control limits for the X chart and moving range chart:

The “quality” of our estimate of the average moving range definitely impacts how “good” our control limits are.  So, how much data do we need to have “good” control limits?

Impact of the Number of Samples on Control Limits

Figure 3 shows the individual control chart based on the first five samples in the data set.  The moving range chart will not be shown.  The LCL and UCL in Figure 1 are 69.6 and 129.5, respectively.  In Figure 3, the LCL and UCL are 57.7 and 142.9, respectively.  The control limits based on 5 samples are much wider than the control limits based on 200 samples.

Figure 3: Control Chart Based on 5 Samples 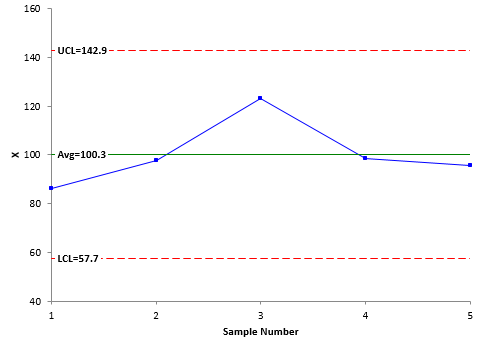 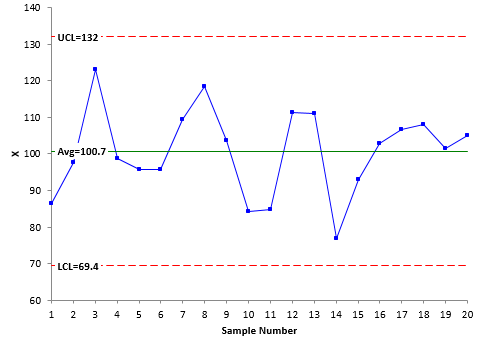 Table 1 shows what happens as the number of samples included in the analysis increases.  The columns in the table are for the average moving range, the overall average, the UCL, the LCL, and UCL – LCL.  The last column shows how much difference there is between the UCL and LCL when compared to the control limits with 200 samples.   For example, with 5 samples, the range between the UCL and LCL is 42.2% larger than for 200 samples.

Table 1: Impact of Number of Samples on Control Limits

Figure 5: Impact of Number of Samples on the Average Range 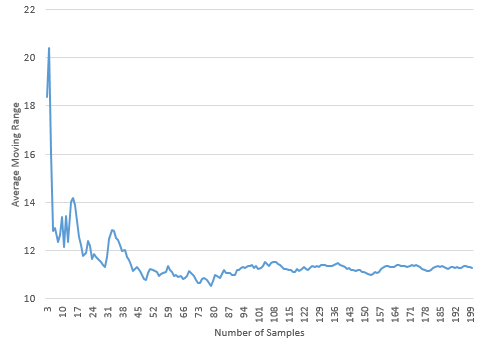 How do we apply this to other situations?  The above analysis is for one set of data based on individuals control charts.  But, what about other charts like the X-R chart?  Are 30 data points enough there?  Do we have to go through the same analysis as above for each situation?  No, you don’t, but we need to talk about degrees of freedom and the coefficient of variation.

Degrees of Freedom and the Coefficient of Variation

Statistical terms often scare us.  What do they really mean?  We will keep it short and sweet here.  The two terms we have to deal with are degrees of freedom and the coefficient of variation (COV).   Why do we have to be concerned with these?  It is because there is a relationship between the degrees of freedom and the coefficient of variation that allow you to determine when you have enough data for “good” control limits – regardless of the type of control chart you are using.

COV, like degrees of freedom, is a measure of the uncertainty in sigma.   There is a relationship between the two.  For any estimate of sigma, the COV is inversely proportional to the square root of two times the degrees of freedom:

Figure 6: COV versus Degrees of Freedom 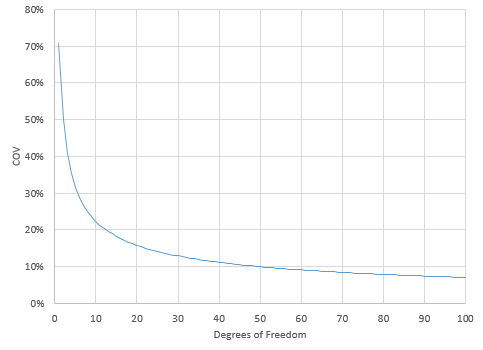 Figure 6 applies for any estimate of sigma, no matter how it was calculated.  We just need a method of determining the degrees of freedom for the various methods for calculating sigma.

Determining the Degrees of Freedom

To calculate the COV, you need to be able to calculate the degrees of freedom.  Dr. Donald Wheeler provides a method to easily do this in his book Advanced Topics in Statistical Process Control (www.spcpress.com).  We will look at the individuals control charts and the X-R control chart here.

where n is the number of samples.

where k = number of subgroups and n = subgroup size.  We will use these equations to find the degrees of freedom in the next section.

We will start with the individuals control chart.  Figure 4 was constructed using the first 20 samples.   The degrees of freedom associated with the average moving range is:

Figure 6 shows that this value of COV is just as the curve is beginning to level off.

Table 2: Degrees of Freedom and COV for Various Sample Sizes

Looking at Figure 6, it appears we may want to go a little further than 20.6% on the COV.  Suppose we decide that 15% is a good value.  You can rearrange the COV equation to calculate the degrees of freedom you need for a COV = 15%:

With an individuals control chart, you will need about 37 to 38 samples to get a COV of 15%.

Suppose you are subgrouping your data and using an X-R control charts.  You are taking five samples per hour and forming a subgroup with those 5 samples.  In this case, n is 5.  Suppose you want to find how many subgroups you need to have a COV of 15%.  This occurs at about 22.2 degrees of freedom – same as for the individuals control chart above.  The following calculations show how to determine how many subgroups you need.

Suppose you want a COV of 10%.  That corresponds to 50 degrees of freedom.  The number of subgroups required for a COV of 10% is about 14, a total of 70 samples. You almost triple the number of samples you need while only reducing the COV by a third.

So what COV should you use to determine when you have enough data?  That decision is up to you.  But, from Figure 6, something in the range of 15% to 20% probably is a good trade-off between samples needed for “good” control limits and minimizing the uncertainty.

This publication has looked at how much data you need before you have “good” control limits.   It was shown how the averages and control limits change for an individuals control chart as the sample size increases – and that there is point where adding additional data to the control limit calculations has very little impact.  It was also shown that there is a critical relationship between the coefficient of variation (COV) and the degrees of freedom.  This relationship can be used to determine how many degrees of freedom you need for a certain COV.  And, from this, how to determine how many samples you need for the individuals and X-R control charts.

In the end, the decision is really yours.  But the guidelines presented in this publication will help determine how much data you need when working with individuals and X-R control charts.  It is based on finding the data that will give you an appropriate value for COV.  This is usually in the range of 15 to 20%.

As mentioned before, our earlier publication said you can start an individuals control chart with as few as 5 points; recalculate the control limits with each new point and then lock the control limits in place after 20 points.  Then recalculate after 100 points.  Was that good advice?  For the most part, it is good advice.  I might change the value to 30 points to lock the limits the first time.