This is the first thing some people do.  We take samples for lots of reason.  Sometimes we are trying to estimate some population parameter such as the average or standard deviation.  Other times we just want to know something about a particular sample and don’t care about anything beyond that sample.

We will use these data to generate some descriptive statistics and then look at how they are calculated and what they mean.

The descriptive statistics output from the SPC for Excel software is shown below (not including the histogram and dot plot options).  The next section takes a look at what each statistic means and how it is calculated.  The table rounds some values.

Table 2: Descriptive Statistics for Our Data 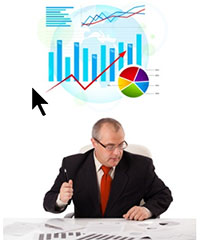 This section explains the output shown in Table 2.

The two most common statistics are the mean and the standard deviation.  The average we all seem to understand – or do we?  The average or mean( X) is defined as the following:

where Xi is an individual observation and n is the number of observations.  The AVERAGE function in Excel does this calculation. This is the true average of the sample.

Explaining the Standard Deviation is an earlier publication that explores how the standard deviation is calculated, what it means, and how it is used.  According to Google Analytics this is the 5th most viewed of our publications this year with over 14,100 views.

The variance is also a measure of the spread in the data.  It is calculated by squaring the standard deviation.

Standard Error of the Mean

The mode is the value that occurs most often. There can be multiple modes, i.e., there can be 2 or more values that occur the most.  If no value occurs more than once, there is no mode for the sample.  In the data above, 104.1 occurred the most (3 times) so the mode of the sample is 104.1.

The coefficient of variation (COV) is defined by:

The COV is a measure of variation relative to the average.  Since it is the standard deviation divided by the average, it does not have any units.  You can use the COV to compare the variation in data sets that have different units or different averages.

This is the equation that Excel uses with its SKEW function. The skewness for the observations is -0.678.

This is the equation that Excel uses with its KURT equation.  The kurtosis for the observations is 1.230. Our previous publication - Are Skewness and Kurtosis Useful Statistics? - is our most view publication with over 31,600 views this year.  This publication gives a lot more information on these two statistics.

And the range is simply the maximum observation – the minimum value (115.1 – 77.4 = 37.7).  The range has to be greater than or equal to 0.  You can find the minimum and maximum values of observations by using Excel’s MIN and MAX functions.

Excel uses the method of interpolation to determine quartiles.  This was incorrectly stated when this publication was first published.  Please see the note in the comments section below.

It should be noted that there are other methods of determining the quartiles that give slightly different answers.  This article from Wikipedia describes three methods.

This publication has looked at some of the typical descriptive statistics that are available with software today.  Each statistic was explained along with how to calculate the statistic.