(Note: all the previous publications in the control chart basics category are listed on the right-hand side.  Select "Return to Categories" to go to the page with all publications sorted by category.  Select this link for information on the SPC for Excel software.)

As 2017 comes to an end, we would like to extend our best wishes to you and yours in 2018.  We have been producing monthly publications since January 2004.  We hope that you have found the information useful and enjoyable.  Now on to our last publication in 2017.

Variation – quite often you don’t know what causes it in your process.  You make a product.  You sample the process on a regular basis and test the product for one or more quality characteristics.   You want to be sure that the product is OK – whatever that means to you.  What are the sources of variation present in the sample you take?  There are three major sources of variation: the measurement system, the sampling method, and the product itself.  We often don’t consider the sampling method.  In fact, in many cases, the variability due to sampling is very small.   But not always.

Now suppose one of those quality characteristics has too much variability.  Maybe it is not capable of meeting specifications.  Where is most of the variation coming from?  Answering that question is a good place to start.  This publication presents a method of determining whether the product, the sampling methodology or the measurement system is causing the most variation in a quality characteristic. This allows you, at least, to determine where to start on your efforts of reducing variability.

To do this, you can run experiments to help determine which variation is causing you the most problems.  Experiments are often analyzed using Analysis of Variance (ANOVA).  This type of analysis helps determine which sources of variation have a significant impact on the quality characteristic.  Let’s not forget about control charts though.  Control charts help you “see” what is going on in a process – and often can be used with ANOVA to gain more insight into the process.

Please feel free to leave a comment at the end of the publication.  You can download a pdf copy of this publication at this link.

Where do you start?  One place that you could start is to define how much variation is due to the three major sources of variation in each sample taken:

The first step is to define an experiment that will give you the information about the variation in the three sources above.  This is remarkably similar to setting up a control chart and using rational subgrouping to explore the variation of interest to you. You decide to use a nested experimental design to find out the information you need. The design is shown in Figure 1 for 3 batches.

In this design, a batch of material is produced.  Each batch is then independently sampled twice.  Each sample is then thoroughly mixed and split into two subsamples.  Each subsample is then submitted to the lab to test for moisture content.  This process is repeated for 15 batches.  This represents a total of 60 subsamples (15 batches x 2 samples per batch x 2 subsamples per sample).

We will analyze the results using ANOVA and then control charts to see what information comes from the two different analysis procedures.

The data for moisture content in Table 1 were analyzed using the ANOVA portion of the SPC for Excel software.  The moisture content is the “response variable” we are interested in.  If you want more information on ANOVA, you can access our publication on single factor ANOVA in our SPC Knowledge Base. This will give you a general idea of how ANOVA works. The ANOVA results for the data in Table 1 is shown in Table 2.

This table is composed of the following columns:

You can determine the variance due to batches, sampling and the measurement system from the data in Table 2. The calculations of the individual variances are based on the expected mean squares (EMS) shown in Table 3.  The EMS is the value the mean square in Table 2 is estimating.

The sampling variance is written as σ2S(B).  The value in Table 3 for the sample variance is 28.53.  This is calculated using the EMS for S(B):

Remember that in our discussion of the data in Table 1, we said that the differences in two samples included both the sampling variability and the measurement variability.  Both are included in the EMS for S(B).

The variation for the batch results can be determined in an equivalent manner. Note all three sources of variation are present in the EMS for batch variability. Table 3 also includes the % of total variance attributed to each source.  It shows that the sampling variance accounts for 78% of the total variance.  You should begin working on determining why the sample process is generating this much variation between samples.

Now let’s look at the control chart results.  We will “roll-up” the control charts starting with the subsample results and moving to the batch average results.  Take a look at Table 1.  What are the sources of variation between Test Result 1 and Test Result 2 for Batch 1 and Sample 1?  Remember, sample 1 was thoroughly mixed and divided into two parts – which we assume are essentially the “same.”  The only source of variation between these two results is the measurement system.  If it was perfect, the results would be the same.  But, of course, no measurement system is perfect. The difference between running the two subsamples for each sample is a measure of the variation in the measurement system. 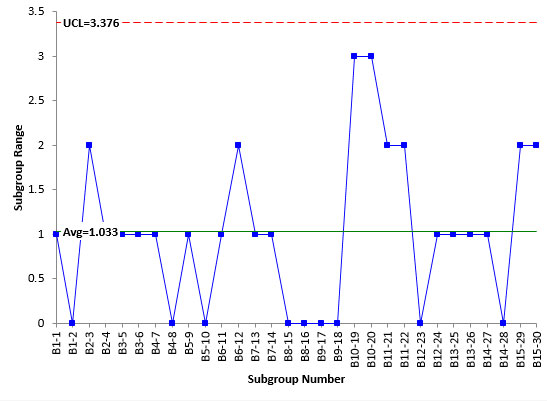 The range chart is in statistical control.  This means that the measurement system is repeatable; i.e., the lab test results are consistent and predictable.  If we repeat the experimental design, we should get comparable results.  There are no special causes present in the lab test results.  This gives us additional information that ANOVA did not.

Since the range control chart is in statistical control, the measurement standard deviation can be estimated from the average range using:

d2 is a control chart constant that depends on subgroup size.  For a subgroup size of 2, d2 = 1.128. The variance of the measurement system is the square of the standard deviation:

This corresponds to a value of 0.917 found using ANOVA.  The values are similar, but the control chart method let you know that the measurement system was repeatable and in statistical control during the experimental runs. It should be noted that the range control chart does not have very many possible values – only four.  This is borderline to being what Dr. Donald Wheeler calls chunky data.  This means that the measurement system may need to be improved.

Figure 3 is the X chart for the data.  Each average plotted represents the average of the two subsamples for a sample.  Most of the points in Figure 3 are beyond the control limits.  This is good when looking at measurements systems.  It means that the measurement system can tell the difference between samples.  This is because the average range above, based on the measurement system, is used to determine the control limits on the  X chart.  There is a wealth of information on measurement systems analysis in our SPC Knowledge Base if you would like to explore this further. 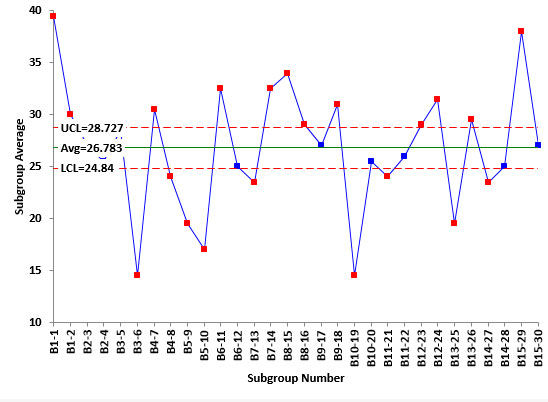 We can look at the sample control charts by taking these two sample averages and forming a subgroup for batch 1.  Table 4 shows the data used to look at sampling. 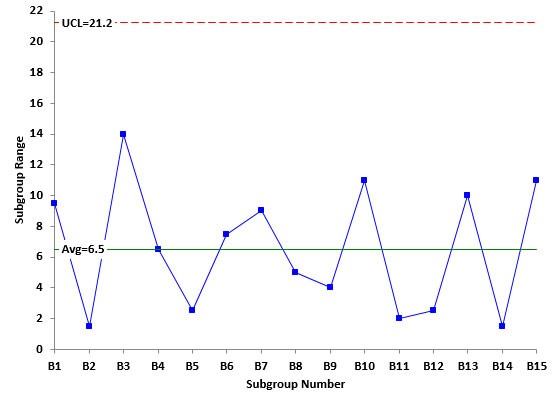 Sigma can now be estimated from the average range as done before.

This corresponds to a value of 28.53 from the ANOVA analysis.

The last thing to estimate is the batch-to-batch variability.  This is done by constructing an individuals control chart for the batch averages (the average of the two samples per batch).  The data used are shown in Table 5.

Figure 5 is a plot of the moving range between the batch averages. This range control chart is in statistical control.  Again, we will not include the X control chart but it is in statistical control as well.  There is no evidence of special cause of variation during the experimental design.  We can expect to get similar results again in the future. 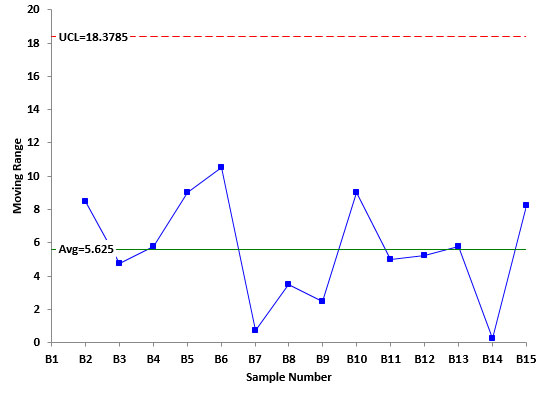 The sources of variation include the batch-to-batch variability, the sampling, and the measurement system.  Sigma for this range chart can be estimated as the following:

The square of this is the variance (Vb).  Thus, Vb = 24.9.  Again, this contains the three sources of variation: batch to batch, sampling and measurement system as shown in the equation below.

This corresponds to the value of 7.128 found with ANOVA.

Table 6 compares the results from the two approaches.

You can see that there are some minor differences in the variance values, but the conclusion is the same regardless of which technique you use: sampling is causing the most variation.  The % of total variance was very close regardless of which method was used. The control charts give you further insight into the stability of the process.