Control Charts and Adjusting a Process

Sometimes, your process produces a result that you just do not like. It is common to adjust a process if you don't like the result – particularly if the result is out of specifications. Unfortunately, adjusting a process for a result that is bad (or that is exceedingly good) is usually not the correct thing to do.

To understand when to adjust a process and when not to, one has to look for signals in the data that could indicate an adjustment is needed. If you learn to look at the data properly, you will be able to separate the process noise from the process signals. Control charts are at the heart of this approach.

A control chart is the way a process communicates with you. It will tell you if everything is alright in the process (just noise present) or if there is a problem that needs to be addressed (a signal is present).

This publication examines how control charts are used to determine when to adjust the process. There are two Chief Chemists (Sam and Mary) monitoring the same test method at two different labs by running a standard on a regular basis. They both are "doing" the same thing, but their two processes are different – and this difference leads to one process having much more variability than the other.

A long time ago, I worked in a PVC plant. I was in charge of the plant lab. Part of the production process involved drying the resin through a rotary dryer. You didn't want the resin too dry or too wet. So, a goal was set for % moisture for the various resins, e.g., 0.10% moisture. If the lab result from a sample was too far away from 0.10%, the process was adjusted. If it was too wet, the dryer temperature was raised. If it was too dry, the dryer temperature was lowered. Eventually, some internal specifications were created. If the % moisture was not between 0.09% and 0.11%, the process was adjusted. Many of the processes had similar internal specifications. This seemed like a reasonable approach to determining when to adjust a process. Of course, I hadn't heard of control charts yet.

Then my knowledge base changed significantly. A major customer was requiring that we begin to use Statistical Process Control (SPC), whatever that was. I spent a significant amount of time learning what SPC was. And I discovered that there was an entirely different way to approach when to adjust and when not to adjust a process – both lab and production processes. And it all revolved around this simple tool called a control chart.

A Tale of Two Chief Chemists

But there is a major different between the two approaches used by Sam and Mary in monitoring the test method. One shows a deeper understanding of control charts and when to adjust a process.

Sam understands it is important to monitor the consistency of a test method over time. This is done by routinely testing a standard or control over time and monitoring the results using an individuals (X-mR) control chart.

Sam monitored the color standard test results over time using the X-mR chart. The X chart he created for the last 80 test results is shown in Figure 1. Sam had to adjust the test method almost daily. 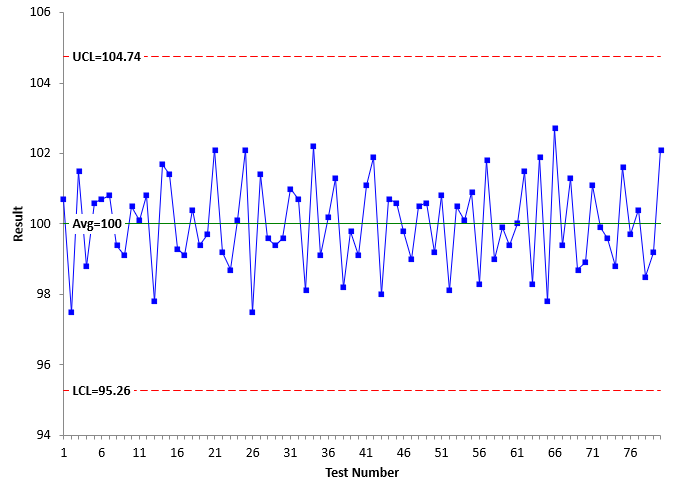 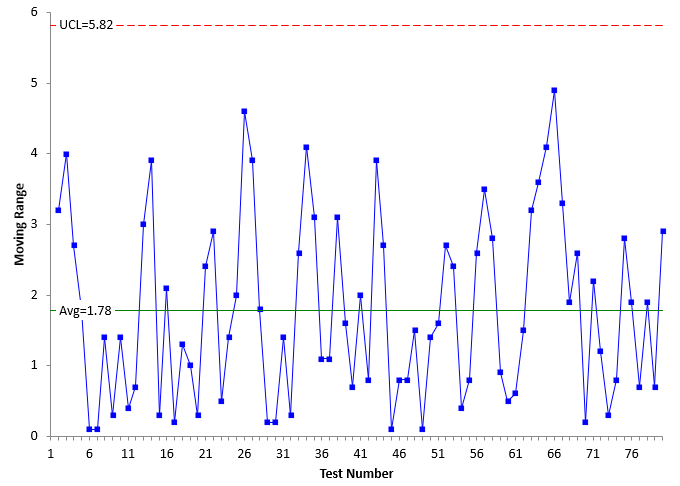 Sam is extremely happy. The test method is in statistical control. The lab is providing good data to production to control their process!

Since the mR chart is in statistical control, Sam can estimate the measurement system standard deviation (σms) from the average moving range:

This value is a measurement of the variation (precision) of the test method.

Mary also monitors the color test method. Mary, though, had learned more than Sam about SPC. She had sought to really understand control charts, learning that a control chart will send you a signal if a process needs to be adjusted or investigated. Mary also ran the standard on the daily basis, but unlike Sam, she did not adjust the test method unless there was a signal. Mary also constructed a control chart for the results. The X and mR charts are shown in Figures 3 and 4. 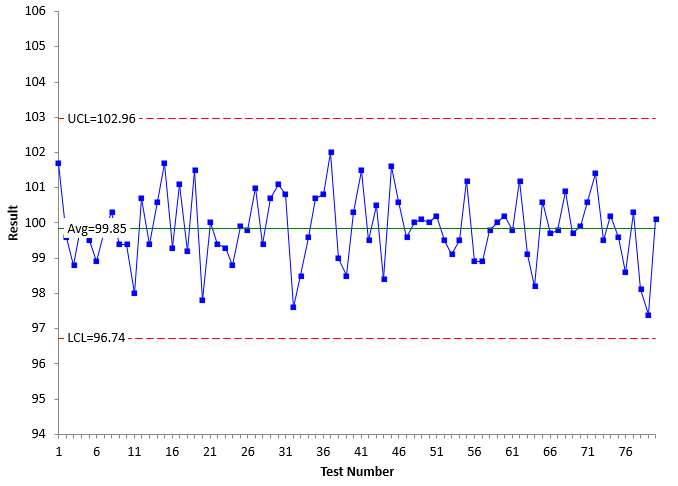 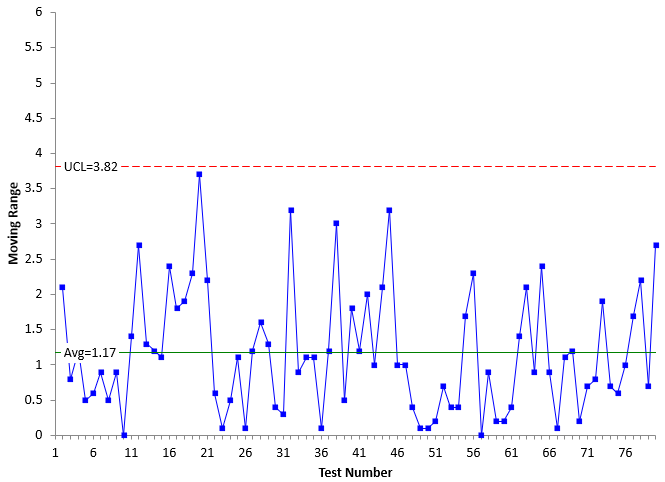 Both Sam and Mary are monitoring the color test method using a standard and the X-mR control chart. Both processes are in statistical control. The averages of both X charts are very close to the standard plate value of 100. Both have estimated the standard deviation of the measurement system. All is good in both cases. Or is it?

The reason for this can be seen by the value of σms for each process. The value is 1.58 for Sam's process and 1.04 for Mary's process. Table 1 summarizes the differences in the two processes.

Sam, on the other hand, didn't realize that you don't adjust a process unless there is a signal. What Sam did does create a process that is stable, in statistical control. But Sam's process has much more variation. Adjusting a stable process, simply increases the variation in a process.

If the process is in statistical control, leave it alone. Do not make any adjustments until there is a signal that an adjustment might be needed.

But the Result is Out of Spec!

Your process is in statistical control. The last result is out of specifications – but within the control limits. What do you do? It is out of spec – you have to do something, right? Adjust the process to get it back within spec?

The answer is that you should do nothing. If the process is in statistical control and still producing out of spec material, it simply means that your process is not capable of meeting specifications. The next sample result will probably be back in specification. The reality is that, for a process in statistical control, there is no statistical difference in the results. Until you reduce the process variation to make the process capable, the only thing to do is to ship everything. There is no difference in the output. For more information, please see our SPC Knowledge Base article The Problem of In Control but Out of Specifications.

Comparison to the Funnel Experiment

What Sam was doing is called "overcontrolling" a process. This occurs when you adjust a process that is in statistical control. There is an experiment that helps demonstrate what happens when you do this. It is called the Funnel Experiment. The objective of this experiment is to drop a marble through a funnel so that it ends up on a target. There are four rules used:

This publication covered the first two rules. Mary was following Rule 1 – leave the process alone as long as it is in statistical control. Sam was basically following Rule 2 – adjusting the process after each drop. These two rules are stable processes. The difference is that Rule 2 has much more variation than Rule 1 as we saw above.

The funnel experiment is a great way to show what happens when you overcontrol a process. For more information, please see our SPC Knowledge Base article Over-Controlling a Process: The Funnel Experiment. We also have a YouTube video that explains the funnel experiment.

Simulation to Create the Data

The data used in this publication can be downloaded at this link. Mary's data was generated using the random number generator in the SPC for Excel software for a normal distribution of 100 and a standard deviation of 1. Sam's data was generated using a macro that used the random number generator with an average depending on the adjustment made and a standard deviation of 1. The adjustment was the result minus 100, the value of the standard. The control charts were made using the SPC for Excel software.

This publication showed the danger in adjusting a process that is in statistical control. Adjustments should not be made until a control chart sends a signal. This is true for all processes – whether they are production processes, service process, lab processes, etc. Overcontrolling a stable process leads to more variation in the output.