Which Out of Control Tests Should I Use?

Please feel free to leave a comment at the bottom of this publication. You can download a pdf copy at this link.

The out of control tests help you determine if the process is in statistical control or not. You will see that these tests focus on two areas: one is a change in the process represented by the control chart. The other area is the setup of the chart – problems with subgrouping or how the process is sampled.

This pattern is typical of processes that are stable. Four characteristics of a process that is in statistical control are:

If a control chart does not look similar to the one above, there is probably a special cause present. Various tests for determining if a special cause is present are given below.

Out of Control Tests

There are many out of control tests. We have covered 8 in previous publications. And there are more than just those 8. We will start with reviewing these 8. For more detailed information, please see the three articles in our SPC Knowledge Base on interpreting control charts:

Interpreting Control Charts (April 2004): Introduces the 8 out of control tests

Control Chart Rules and Interpretation (March 2016): Describes possible process reasons for the out of control situation

Applying the Out of Control Tests (January 2017): Shows which out of control test applies to which chart

We also have a brief video on interpreting control charts at this link.

The 8 control chart rules listed in Table 1 give you indications that there are special causes of variation present. These out of control tests come from the Western Electric Statistical Quality Control Handbook (1956) for the most part. The first four are called the Western Electric Zone Tests.

Missing from this list is the out of control test mentioned by Dr. Wheeler in his book. This will be covered below. First, however, the 8 rules are reviewed, and a decision made if the rule should be on your "A" list for out of control tests.

Rule 1: Points Beyond the Control Limits

Figure 2: Points Beyond the Control Limits 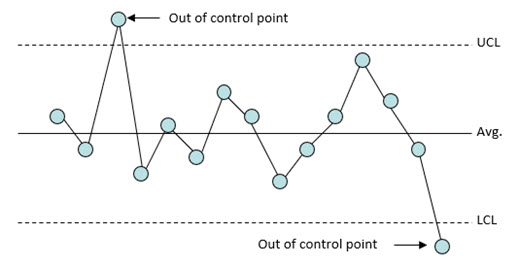 Action should be taken to find the special cause and remove it from the process.

Rule 1, points beyond the control limits, is definitely on the "A" list of tests to use.

Rules 2 to 4 in Table 1 are what is called "the zone tests." These tests are designed to detect small shifts quickly. Again, it is not often that you are that concerned with small shifts. You are more concerned with large shifts that will be covered by points beyond the control limits.

However, there are times, such as monitoring test methods, where you are concerned about the smaller shifts.

Figure 4: Test for Zone A 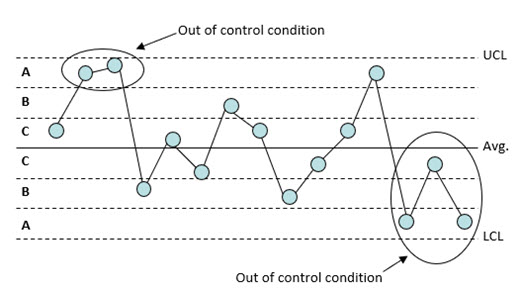 To use this test, you do have to add the two-sigma line to the control chart. So, it may not be the best test to use. It does not make the "A" list, unless you are very concerned about small shifts in the process average.

A special cause exists if four out of five consecutive points fall in zone B or beyond as is shown in Figure 5.

Figure 5: Test for Zone B 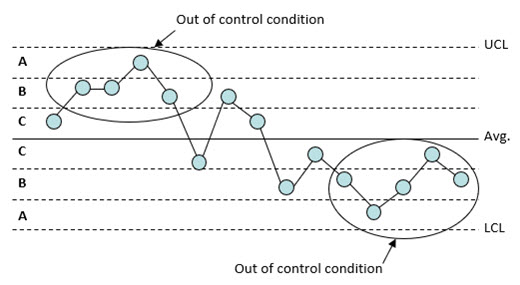 This test is applied for zone B above the average and then for zone B below the average. Like the test for Zone A, you need to calculate an additional line, in this case, the one-sigma line. It might not be the best test to use, so it is not on the "A" list unless you really concerned about those small shifts in the average.

A special cause exists if eight to ten consecutive points fall in zone C or beyond as is shown in Figure 6.

Figure 6 shows 8 points in a row. You might ask why the range is from eight to ten consecutive points. Years ago, when I first was trained in SPC, I was taught seven in a row was the correct number for this test. I used this for a long time. It comes from Eugene Grant's book Statistical Quality Control (1946). Most now believe that seven is not a good number to use for this test – it leads to too many false signals. You can pick what you want to use. Most people appear to use eight consecutive points now.

Note that this test does not require any additional lines, like the tests for Zones A and B. It is easy to understand runs above and below the center line. Rule 4, eight consecutive points above or below the average, is definitely a candidate for the "A" list of out of control tests to use.

A special cause exists if there are seven points in a row trending up or trending down as shown in Figure 7. Six points is also used sometimes instead of 7.

Figure 7: Trend Out of Control Situation

There are no additional lines besides the control limits for this test. You may be inclined to add it to the "A" list. But there are some issues. An upward trend often does not have one point after the other. There may be a general upward or downward trend. So, this test would not pick that up. What test does pick up that type of trend then? No test does, but you do, by looking at the chart. Another issue is that data can be highly autocorrelated. The test picks this up but does so incorrectly. It is not a special cause of variation.

A mixture exists when there is more than one process present but sampling is done for each process separately. For example, suppose you take three samples per shift and form a subgroup based on these three samples. If different shifts are operating at different averages, a mixture can occur. A mixture (a special cause) is present if eight or more consecutive points lie on both sides of the average with none of the points in zone C as is shown in Figure 8.

This test is applied to the entire chart. This test does have additional lines like the tests for zones A and B. So, should it be on the "A" list of out of control tests to use? No, it should not be included on the "A" list. This out of control situation should show up as you first put the control chart together. If it does, find out why the averages are different and correct the problem. Or, start a different control chart for each process.

Of course, there could be the situation where one of the processes significantly changes, and the pattern emerges. One of the zone tests will probably be violated before the mixture test does. It doesn't make the "A" list.

Stratification occurs if two or more processes are being sampled systematically. For example, stratification can occur if samples are taken once a shift and a subgroup size of 3 is formed based on the results from three shifts. It is possible that the shifts are operating at a different average or variability. Stratification (a special cause) exists if fifteen or more consecutive points fall in zone C either above or below the average as shown in Figure 9.

Note that the points tend to hug the centerline. This test involves the use of the zones but is applied to the entire chart and not one-half of the chart at a time. If stratification is occurring, a histogram of the individual measurements will probably be bimodal.

A special cause of variation is present if 14 consecutive points alternate up and down as shown in Figure 10.

This out of control test does not require additional lines like zones A and B. Should it be on the "A" list? By itself it should not. But if you look back at the out of control tests for mixtures, stratification and overcontrol, you see there are patterns that repeat. This leads to a rule that isn't typically used for control charts.

Earlier, it was stated that a process was in statistical control if there were no points beyond the control limits and there were no patterns. Patterns are not random. Several of the out of control tests are really patterns that repeat:

This leads to the Pattern Detection Guideline from Dr. Wheeler:

"An explanation should be sought anytime a pattern repeats itself eight times in succession."

And this rule does belong on the "A" list. What this rule requires is for you to look at the control chart and look for patterns in the data. Patterns will not always be detected by the out of control tests. An example is shown in Figure 11. 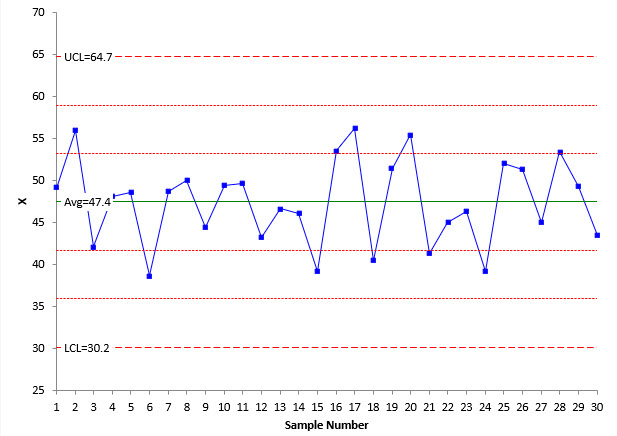 The chart in Figure 11 does not indicate there is a special cause of variation.  None of the tests indicate that the process is out of control.  But is there an issue? Yes, there is. There is a repeating pattern. Two high points followed by one low point. The process is not random and therefore not in statistical control. There is a special cause of variation causing the pattern. The challenge is to find it.

What tests make the "A" list of out of control tests to use. There are three:

If small shifts are very important to you, then you can add Rules 2 (Zone A) and 3 (Zone B).

And there is one more rule you can use: your knowledge of the process. If the control chart on your process looks "funny" to you, investigate it.