You have just completed a Gage R&R study on one of your critical to quality measurement systems.  You want to find out how “good” that test method is.  You have done everything right.   You carefully selected the parts to reflect the range of production.  You carefully selected the operators to do the testing and randomized the run order for the parts.  You ensured that the operators didn’t know what part they were testing.  Each operator tested each part the required number of times.  Now, you are ready to analyze the results.  What method do you use?

You can analyze the Gage R&R study using one of the following analysis techniques:

You may download a pdf copy of this publication here.

The data we will use is from the 4th edition of the Measurement Systems Analysis manual published by AIAG.   In this Gage R&R study, there are three operators and ten parts.  Each operator runs each part three times.   The data are shown in Table 1.

For example, operator A ran part 1 three times with the following results: 0.29, 0.41, and 0.64.  The data from this table are analyzed using each of the three Gage R&R analysis techniques using the SPC for Excel software.   Before we start, we will quickly review the sources of variation in a Gage R&R study.  There are four sources we primarily follow: repeatability, reproducibility, part, and total.

The Sources of Variation in a Gage R&R Study 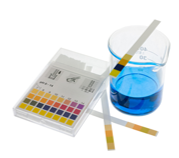 The two major sources of variability that we are interested in a Gage R&R study are the repeatability and reproducibility.

The relationship between the total, part and measurement system variation is given by the equation below

where the subscripts represent the source (t = total, p = part, and ms = measurement system).  Note that this equality is based on variances.  Remember that the variance is the square of the standard deviation (sigma).

This methodology has been around for many years and was, for much of that time, the preferred method for analyzing a Gage R&R study - mostly for the ease of calculation.  That is no longer the case today.  One of our previous publications laid out the calculations using the Average and Range method in detail.

The average and range method forms subgroups based on each operator-part combination (e.g., one subgroup is A-1 for operator A and part 1).  The three trials from Table 1 make up that subgroup (0.29, 0.41, 0.64).  Subgroup averages and ranges are calculated.  Each operator’s average and range is then calculated.  The average range for the three operators is then found.  In this example, the average range is R = 0.342.  To find the repeatability (called EV = equipment variation by AIAG), this average range is multiplied by a constant, K1, that depends on the number of trials.  For 3 trials, K1 = 0.5908.  Thus,

A word of caution here.  The value of EV does not represent a variance.  It represents a standard deviation.  This is the start of the problems associated with the average and range method.

The range in operator averages is then calculated.  This is called XDIFF and is 0.445 in this example. This value is used in the following equation to find the reproducibility or the appraiser variability (AV).

The Gage R&R value is then found by combining the EV and AV results using the following equation:

The part variation (PV) is found by determining the range in part values (Rp) and multiplying this range by a constant (K3) that depends on the number of parts.   For this example:

Finally, the total variation (TV) is then found by the following equation:

Again, not that the above equation for TV is not the variance – but the variation represented by the standard deviation.  We can use these results to determine the % of variation (NOT variance) due to each source of variation.  The results are shown in Table 2.

So, what does this value of %R&R mean?  The acceptance criteria from AIAG are given on page 78 of their measurement system analysis manual.  The criteria given there are reproduced in Table 3 below.

The manual does say that these criteria alone are not an acceptable practice for determining the acceptability of a test method.  They are just guidelines.  But, in reality, many people do just that.  So, with our value of 26.88% for the % R&R, we would conclude that the test method may or may not be acceptable – it depends on the situation.

Analysis of variance (ANOVA) is a technique that examines what sources of variation have a significant impact on the results.  This approach actually adds another source of variation to the mix: the operator*part interaction.  This interaction is usually not significant so we will leave it out of this discussion.  What ANOVA does is compare the variation in part and operator results to the repeatability of the test method.

The Gage R&R output for our example is shown below.  Remember, there is no operator*part interaction so it was taken out of the ANOVA table below.

The fifth column is the F value. This is the statistic that is calculated to determine if the source of variability is statistically significant. It is based on the ratio of two variances (or mean squares in this case).  The last column is the p value – a value ≤ 0.05 is considered significant.  So, both the parts and operator have a significant effect on the results.

With ANOVA, you determine the % of the total variance (not standard deviation) due to each source.  The following equations can be used to calculate the variances when there is no operator*part interaction.  The repeatability variance is simply the mean square of the repeatability source of variation.

The reproducibility comes from the mean square of the operators (with n = number of trials and p = number of parts):

The part variance comes from the mean square of the parts (where o = number of operators).

The results are shown in Table 5.  The calculations are covered in our September 2012 publication.

Table 5: % Contribution to Variance by Source

From this analysis, the % Gage R&R is 7.76%.  The AIAG reference manual does include ANOVA as a way of analyzing a Gage R&R study.  In fact, using these same data, the manual now says that the test method is acceptable since the % Gage R&R is below 10.  What?  How can it be one thing with the Average and Range method and another with the ANOVA?  You probably already know the answer, but we will review it later.  Next, we look at the EMP methodology.

Our last two publications took an in-depth look at the EMP methodology.  The EMP methodology is similar to the ANOVA method in that it determines the variances due to the different sources of variation and determines the % contribution due to each source.  Like the Average and Range method, it uses subgroups of data to determine the variance due to the various sources of variation.   It does not take into account the operator*part interaction.

The approach, not surprisingly since it is Dr. Donald Wheeler’s approach, includes the use of control charts.  A range chart is made based on the subgroups composed of each operator-part combination.  As long as the range chart is in statistical control, the repeatability can be estimated from the average range (using Dr. Wheeler’s nomenclature):

where d2 is a control chart constant that depends on subgroup size (the number of trials).  The numerical results of the calculations are shown in the table below.

The range of operator averages is used to find the reproducibility using the following:

The range of the p part averages is used to determine the product variance using the following:

The total variance is the sum of the product variance and the combined Gage R&R variance:

These results are very close to those obtained from the ANOVA Gage R&R methodology.  Now, lets compare the results.

Note that the columns for variance and % of total variance are very close for all three methods. So, the three methods, when using the variance, generate very similar results. 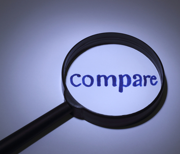 But the bigger question is how to interpret the results.  The criteria given by AIAG are just guidelines to consider (see Table 3).    But if you apply them directly to the variance, most of the % of variance range is unacceptable – anything over 30% is not acceptable.

Dr. Wheeler’s EMP approach uses a completely different method.  He classifies the test method as a First, Second, Third or Fourth Class monitor based on the intraclass correlation coefficient (), which is the ratio of the part variance to the total variance:

Table 8 shows how Dr. Wheeler suggests the results be interpreted.  The last column in the table was added to show the %R&R value and AIAG guidelines for acceptability.

This table was described in detail in our previous publication.  Please refer to that publication for more information.  The first column lists the value of the Intraclass Correlation Coefficient.  The second column lists whether it is a First Class, Second Class, Third Class or Fourth Class monitor – with “First” being the best.  The rest of the table (except the last column I added) gives information about how much a reduction in process signal there is, the chance of detecting a major shift, and the ability to track process improvements.

You can see from the table, a First Class Monitor has a % R&R range of 0 to 20%.  Under the AIAG guideline, a test method is acceptable if the % R&R is 10% of less.  It is marginal in the range of 10 to 30%.  The % R&R for our example data is about 7%.  So, it is First Class Monitor and acceptable under AIAG guidelines.  This means that there is less than a 10% reduction in a process signal, there is a better than 99% chance of detecting a point beyond the control limits (Rule 1) and that the measurement system will be able to track process improvements up to Cp80.  Cp80 is calculated based on specifications and marks the point from the measurement system will move from a first class to a second class monitor.  Rules 2 to 4 are the zone tests.   Wow, a lot more information than the guidelines in Table 3.

So, what should you do to analyze a Gage R&R study?  Use the ANOVA or EMP method to analyze the Gage R&R study.  They will give similar results for % of variance.  The EMP method does have some control charting built into it which gives it the edge to me (see our last month’s publication).  Then interpret the results using Dr. Wheeler’s approach in Table 8.  Rate the test method as a First, Second, Third or Fourth Class monitor and then use the information in the table to understand what that means.

But for Gage R&R studies, use the ANOVA or EMP methodology and interpret the results as a First, Second, Third or Fourth class monitor.  Forget about the Average and Range method results based on the standard deviation and their guidelines for what makes an acceptable measurement system.